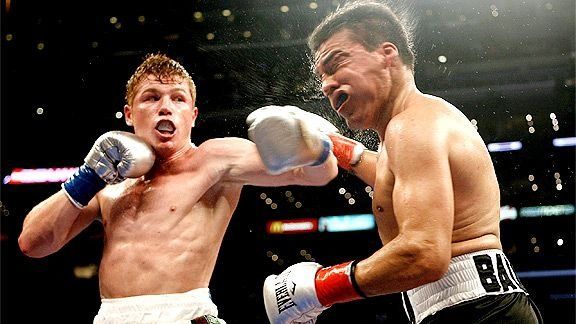 Boxing is one of the most exciting combat sports around – simply because it is so unpredictable. In just a split second, an underdog boxer could deliver his strongest hook, knock out his opponent, and suddenly be crowned champion. Or if the tables are turned, an undefeated boxing champion could be the one getting knocked out and losing his title – all in a matter of moments.

Over the years, the benchmark has been set very high by some of the greatest boxing legends including Sugar Ray Robinson, Mike Tyson, Muhammad Ali, Manny Pacquiao, and Joe Louis. But we believe that there are some young up-and-coming boxers out there who have what it takes to leave their mark – alongside these legends – in the boxing world.

This promising 25-year-old Junior Middleweight has won 46 out of 48 total fights, of which 32 were by knockout. Throughout his career, Alvarez has triumphed over some fierce competitors such as Austin Trout and Erislandy Lara – proving that he’s more than capable of thriving in the ring.

He started boxing when he was 13, after watching his older brother, Rigoberto Alvarez, make his pro debut. Two years later, Saul was named the 2005 Junior Mexican National Boxing Champion in Tuxtla Gutierrez, Chiapas, and had an impressive amateur record of 44-2. It’s no surprise that he went pro in that same year – all while he was only 15.

He appears to be improving with every fight, and we think he’s only going to get better.

Although Terence Crawford was once described as “boring” and “timid”, he didn’t let that affect him. Instead, he proved those people wrong by becoming a pound-for-pound top 10 fighter and basically letting his superb boxing skills do the talking.

Currently undefeated, Crawford has won all 27 of his fights, and clinched the WBO Junior Welterweight title. We think this is all thanks to the fact that he’s athletically gifted as he’s able to fight well and easily switch-hit from orthodox to southpaw stance. It is no wonder that this has given him an edge over his opponents, and will continue to be what sets him apart from his competition.

Also, we foresee him continuing this winning streak for a long, long time.

Ask any athlete about getting back on track from an injury, and you’ll learn that it’s one of the toughest things to do – especially when the momentum is lost. But IBF Welterweight Champion Kell Brook did not let this affect his career.

Despite getting stabbed in the leg while on holiday, he made a spectacular comeback 6 months later and till today, he remains undefeated.

We believe that his great mental (and physical) strength, coupled with his long arms and fast hands, will be what takes him far in his pro career.

What sets Anthony Joshua apart from the other undefeated boxers, is the fact that he has won all 15 of his fights by knockout.

Joshua may be considered a “late bloomer” to some, as he started boxing only at the age of 18, which is later than most of his competitors. But his passion for the sport drove him to work his way to a pro career (and 15 wins)! He has shown us that it’s never too late to chase dreams, and make them come true.

Also, we think that this Brit Heavyweight Champion has what it takes to rise in the boxing world because of his size, power and speed. Not to mention the fact that he has ever won a gold at the Olympics!

The 2-metre tall Deontay Wilder is another undefeated boxer, who won all 36 of his fights (35 by KO!) Known for his explosive punching power and great stamina, Wilder has a fiery and erratic boxing style. Also, he managed to stop 32 of his opponents within the first four rounds.

Because Wilder has made tremendous growth as a pro boxer in the last couple years, we can safely say that he’ll only grow even more as he takes on future opponents.

Are you impressed by these rising boxing stars? We most certainly are. And we believe that all their upcoming fights will keep you at the edge of your seat!