5 Muay Thai Drills You Need To Be Doing 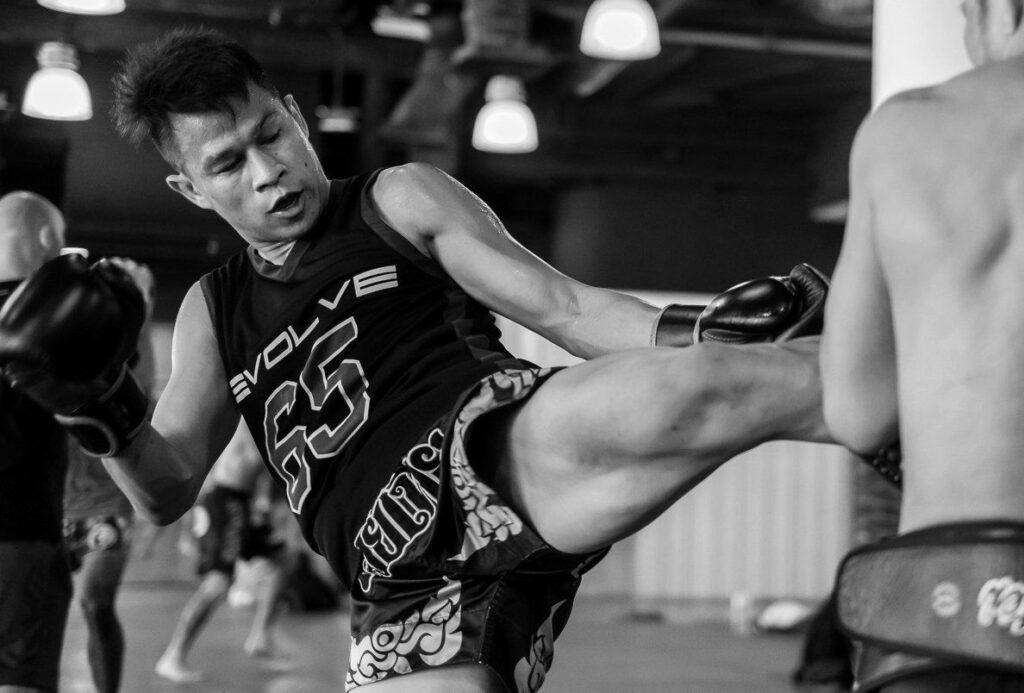 Drillers make killers. Drills build skills. Drill to win. These are just some of the hashtags and slogans you’re almost guaranteed to see all over the internet where training martial arts is concerned. But why drill at all? Aren’t pads and sparring enough? Can’t you get good enough just hitting the bag by yourself in the garage?

You might be surprised to find how integral solid sets of drills can be to your development as a martial artist, alone or with a partner.

Whether you’re a fighter or just a hobbyist, everyone wants to improve. Let’s take a look at 5 key drills to improve your Muay Thai game.

Probably the number one drill for improving your martial arts striking skills, and almost certainly the most under utilized, shadow boxing quite simply is the simulation of a fight performed completely by yourself. It’s an opportunity for you to practice your strikes, defense, movement, cardio, and footwork all at once. To get yourself started, begin by moving around in a space similar to the size of a small boxing ring. Focus on staying balanced and not crossing your feet, throwing attacks in combination and with proper form and discipline. If you can do so with a mirror, so much the better! It might look like you’re fighting an army of invisible ninjas, but it’s really an opportunity for you to work the full range of your techniques at a realistic speed. At first, you may feel like your not getting it, or that you don’t look quite right, but that’s exactly what it’s for. Perhaps the best part about it is that you don’t need a partner to do it, so for those of us with busy lifestyles or travel commitments, finding a few minutes here and there to improve is easy.

A term coined by the world renowned Thai boxers from Holland, Dutch drills up the ante when it comes to practicing your techniques in a fight-realistic way. Best performed while wearing gloves and shin pads, the goal is to perform a combination at high intensity with a moving and defending partner. Mind you, the goal isn’t to strike hard, but fast, and accurately. A classic example would be the famous jab, cross, lead hook, low kick combination. Your partner covers up to defend, and you work on shot placement and fluidity, before defending yourself and letting your partner take their turn. To get the most out of this drill, try to move around using correct footwork between attacks to get as close to fight-realism as possible, while keeping the power low to protect your most valuable asset, your training partner.

Commonly seen being performed by the very best Muay Thai fighters in the world, touch sparring is the playful, light contact sparring you might see on any given day during Muay Thai training. You may have even seen a video or two. Lot’s of smiling, lots of shouting, and the trying out of more unusual and complex techniques. Either with gloves or without, and almost never with shin pads, this type of “sparring” fosters an enjoyable format of experimentation, while encouraging very light contact with a partner. When you spar light, you decrease stress and allow the mind to open up and try new things. You’re not trying to win the rounds, just experimenting with new techniques on a moving partner. There may not even be a strict time limit for this drill, and quite often it is started spontaneously during down time! Typically the moves are unplanned and flow freely, with an emphasis on more complex attacks such as kick catching, timing strikes, and shot placement. For best results, try it out with your number one training partner, someone who will push you, stay relaxed, and that you get the most out of during your session.

Free drilling is something of a happy marriage between touch sparring and the Dutch drills mentioned above. Here, a situation is given to the training partners, and then each follows on with their own combinations of attack. For example, blocking the jab. One partner initiates the drill by firing a straight jab at their opponent, the other will then block, parry, or slip the punch and then counter with their own moves. In this way, fighters are encouraged to experiment with their own combinations, as opposed to rigidly practicing set moves, which allows greater expression of technique during a fight.

These are a many and varied selection of training sets, designed for improving reaction speed. The great thing about drills like these is that you can try them out easily, even if you don’t have too much experience yet. For the newbie, it’s a chance to learn the fundamentals of combat. For the experienced fighter, it’s a method of improving the basics, an essential part of any training regime. One great method to improve both kicking technique and timing is to do so with kicks. Partners take turns throwing a random kicking technique at each other. It might be a low kick, push kick (teep), high kick, or some other variation. As soon as it lands on one partner, the idea is to the instinctively return fire, almost without even thinking. The ability to answer back with a strike of your own after receiving one from the opponent is essential for any fighter, and building this in using drills is one of the best methods to ensure that it translates into combat.

Drills are an essential part of any martial arts training regime, so try some of these out with your training partners. Simply set a time limit (1-3 minutes is best, depending on the drill), and get to work! You’ll find that with repetition and a little dedication to some of these drills that your technique, timing, speed, and even sparring will improve drastically over time. Drills are a brilliant way to expose our weaknesses and reinforce our strengths in a low-pressure environment, unlike sparring for example. Just remember to keep calm, keep it playful and focus on the objective at hand.

People take up Muay Thai for different reasons. Some pursue it with a passion, others just stumble upon it. Whichever way life has brought you to the Muay Thai gym, you’re here for a reason….

We’re barely into the New Year, and already, we’ve begun faltering from our resolutions to lead a healthier lifestyle. A lot of us may be scratching our heads and wondering how will we ever get…

If you are interested in starting a fitness routine that never feels like a chore, you should seriously consider learning Muay Thai. Also called the Art of Eight Limbs, Muay Thai is universally viewed as…

Success cannot exist without failure. Humans experience failure many times throughout their lives. It’s a part of nature. But failure often denotes a sense of defeat, even if this is not truly the case. In…

If you ask most boxing historians who the greatest pound-for-pound fighter in boxing history is, many will tell you it’s Walker Smith Jr., aka Sugar Ray Robinson. The name Ray Robinson occurred when he used…