5 Reasons Why Angela Lee Will Be Better Than Ronda Rousey 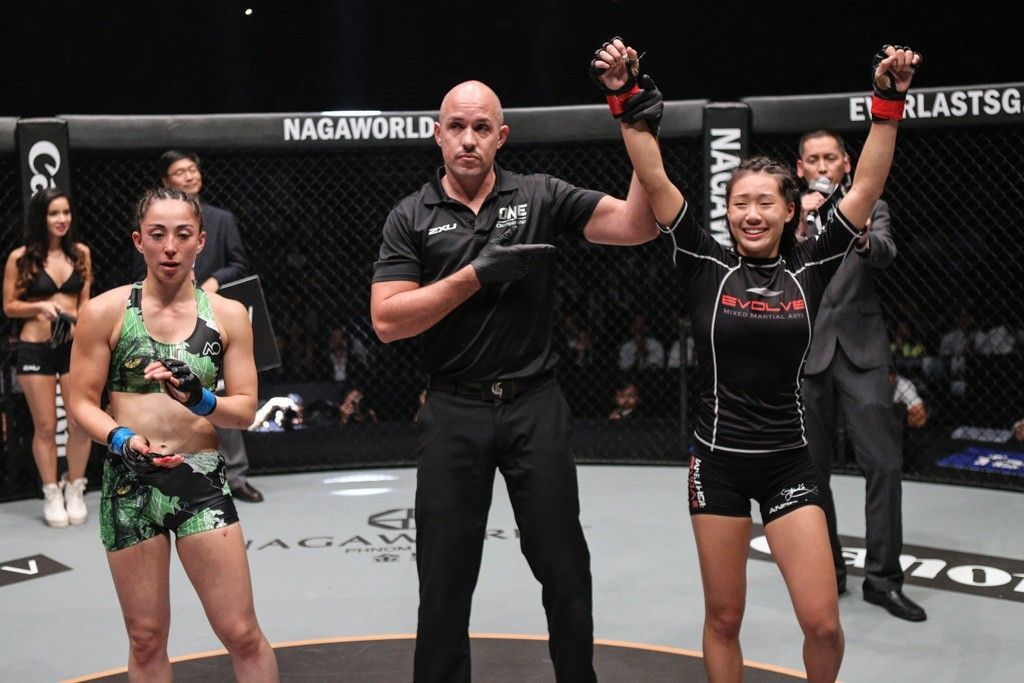 The MMA world is abuzz with the latest twister submission executed by none other than ONE Superstar Angela Lee. Angela is the 1st woman in MMA history to hit a twister submission in a fight for a major global MMA organization.  The 19-year-old MMA sensation has been making waves around the global MMA community with her three straight victories via 1st round submission.

Posted by ONE Championship on Friday, November 13, 2015

Meanwhile, Ronda Rousey fans all over the world have been reeling from her devastating loss against Holly Holm. The former UFC Women’s Bantamweight World Champion has been credited for bringing women’s MMA into the spotlight. Rousey is also the first woman to be signed to fight for the UFC. Although Rousey’s legacy will forever be revered, there is always the possibility of someone outshining what Rousey has started.

Evolve Daily believes that ONE Superstar Angela Lee is that someone who could carry the torch in the future for WMMA, especially in Asia. Today, Evolve Daily reveals 5 Reasons Why Angela Lee Will Be Better Than Ronda Rousey:

At only 19 years of age, Angela Lee is already a 2x Pankration World Champion as well as a Brazilian Jiu-Jitsu Brown Belt, a decorated Hawaii State Wrestling Champion, and a Taekwondo Black Belt. Known for her devastating submission skills, solid wrestling, and aggressive stand-up, Angela is truly well-rounded in all facets of MMA. Ken Lee is a world-class expert in striking, wrestling, and submissions, especially as it applies to the sport of MMA.

Angela’s father, Ken Lee, instilled the importance of training martial arts in his daughter from the tender age of 3 years old. Ken Lee started training Angela in all aspects of MMA (striking, wrestling, submissions, etc). Today, she has fight experience way beyond her years with several hundred matches in her competitive career already.

A decorated martial artist himself with a 1st Degree Black Belt in Brazilian Jiu-Jitsu and a 6th Degree Hapdosool Master Black Belt, Ken Lee is a world-class expert in striking, wrestling, and submissions, especially as it applies to the sport of MMA.  Angela’s mother is also a talented martial artist who is a former Canadian National Champion and holds a 5thDegree Hapdosool Master Black Belt.  All of Angela’s siblings are high level, expert martial artists for their respective age groups, including 17 year old Christian, 11 year old Victoria, and 9 year old Adrian

3) She’s got the best team in Asia behind her. ONE Superstar Angela Lee takes her MMA training to the next level at the Evolve MMA Fighters Program.

As a member of Asia’s top professional fight team, Angela has no qualms about training with a roomful of decorated World Champions in every discipline of MMA. In fact, she thrives on it. The Evolve Fight Team has become her family and Evolve MMA is her home away from home. As the saying goes, “diamonds are made from heat and pressure.”

By learning and upgrading her skills in every area and surrounding herself with the best team of high-level coaches and teammates possible, Angela Lee is set to become even more unstoppable.

4) She’s willing to do anything.

What would you do to chase your dreams? For Angela Lee, she gave up the comforts of life in Hawaii and the daily warmth of her family to move half way across the world to Singapore to learn under the best coaches and teammates on the planet. It clearly demonstrates that Angela is willing to do anything and everything just to achieve her dreams. She is fearless and she is relentless. According to her coaches and teammates at Evolve MMA, Angela is the single most talented female they’ve ever worked with. Despite the number of high level female MMA athletes from different organizations such as UFC, Bellator, and ONE Championship who have trained at Evolve, her coaches and teammates all say that Angela’s talent, skills, and work ethic simply stand out from the rest.

There’s no doubt that the future is bright for ONE Superstar Angela Lee. With another fight coming up in ONE: Spirit of Champions on December 11 in Manila, we can only expect her to finish the fight in typical Angela Lee fashion. There’s no doubt that we can expect only awesome things from the MMA prodigy who is determined to be the first Singaporean to become a World Champion in the sport of MMA.