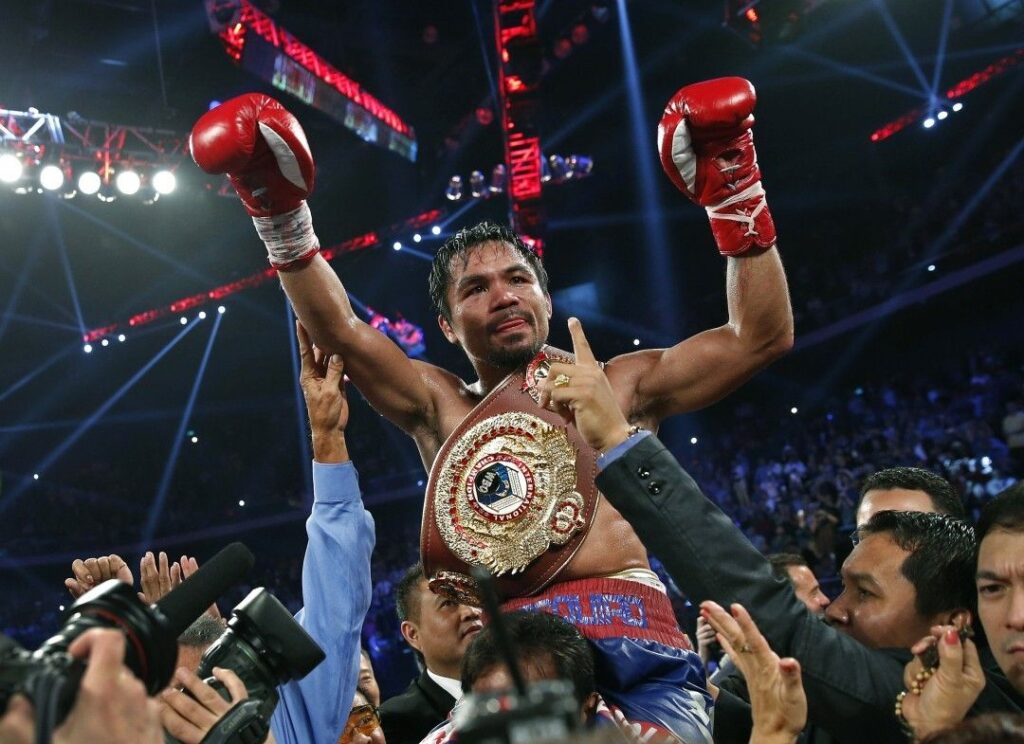 From his humble beginnings, to his now legendary status, Manny Pacquiao’s popularity in the sport of boxing over the last decade and a half can only be attributed to one single fact; that he is without a shadow of a doubt, boxing’s ultimate fighter.

Pacquiao has carried the qualities that earned him the tremendous support and adoration from fans through eight different weight classes, a previously unimaginable feat in the sport of boxing.

Evolve Daily brings you the 5 qualities that make Manny Pacquiao the ultimate fighter: “He’s got something in his hands where he just, pop, and you can wobble. He can hurt you.”
– Shane Mosley on Pacquiao’s punching power

Manny Pacquiao’s punching power was evident even when he was just a 16-year old 105-pounder. However, what’s more amazing is that his power is relevant even in the heavier weight classes. For example, prior to his fight with Pacquiao, Sugar Shane Mosley – a seasoned veteran and natural welterweight – had never been knocked down before in 54 fights. But Pacquiao caused Mosley to temporarily lose control of his legs with a straight left in the fourth round of their fight.

There is no doubt that Pacquiao has surprisingly big punching power for a fighter his size. His stunning performances against bigger fighters like David Diaz, Miguel Cotto, Chris Algieri and Ricky Hatton have all shown how hard he hits. “He can’t handle your speed son!”
– Freddie Roach to Pacquiao in the corner of his fight against Oscar De La Hoya

These are the words that have been the story of not just Pacquiao’s fight with De La Hoya, but all his fights. Manny Pacquiao has proven time and time again to be one of the fastest boxers in history. While speed and quick-handedness are common in the lighter weight divisions, Pacquiao was able to carry the same level of speed throughout his career and to the heavier weight divisions. Pacquiao’s uncanny speed has proven too much for even his fastest opponents, which include Timothy Bradley, Marco Antonio Barrera, and Erik Morales. “He was masterful in side movements. He was sensational, like a modern day willie pep, it was brilliant.”
– Mike Tyson on Pacquiao’s performance vs. Rios

The scene of Manny Pacquiao throwing shots from a variety of angles with blazing speed at his completely dumbfounded opponents has become a familiar sight to boxing fans throughout his career. His ability to create angles can be attributed to the way he utilizes his footwork to move around the ring. This has made it difficult for his opponents to see the punches coming or to even retaliate at all. “Have you ever had a fly in front you and you can’t catch it and you’re like “please go away”? Manny Pacquiao was like that for every round.”
– Oscar De La Hoya on his 2008 fight with Manny Pacquiao

Manny Pacquiao has never gassed out in a fight! This is incredible considering the amount of punches and movement he puts into a fight. In his fight against Joshua Clottey, Pacquiao threw a total of 1231 punches, and he did it with the same level of speed and power throughout all 12 rounds! “This is the brilliance of the Filipino slugger!”
– Jim Lampley after Pacquiao knocks Ricky Hatton down for the second time.

Pacquiao’s power, speed, footwork, and conditioning would not have made him the star he is today without his most evident quality: his fighting spirit. Pacquiao’s aggression, heart, and will to win is unmatched, making him one of the most exciting fighters to watch not just in boxing but all of combat sports. He is undoubtedly resilient, a trait that all his fans admire.

Manny Pacquiao will be forever known to the world as boxing’s ultimate fighter.