At first glance, brothers Chew Zheng How, 13, and Chew Zheng Hui, 11, are just two ordinary kids who do ordinary things. But take a closer look, and you’ll discover there is more than meets the eye.

Three years ago, the two siblings discovered martial arts and fell in love almost instantly with the practice. After booking a trial class and experiencing first-hand the joy of training, the boys were set on a path to unleashing their greatness, changing their lives forever.

“When we brought him here for the trial, he liked it so much and he told me, ‘Please sign me up!’ Because Zheng How does not like things so easily, so when he likes something, I should follow him and find out more about it, and that was when I enrolled them,” said their mother.

“They have been enjoying the training until today.”

The brothers spend their time training Muay Thai and Brazilian Jiu-Jitsu, learning and soaking up knowledge from the World Champion instructors at Evolve.

At such a young age, however, you could imagine how it would have been for pre-teen boys joining a martial arts class for the very first time. But the training fit immediately, and the experience was seamless and engaging.

“My first class experience was fun and exciting. All the instructors were very kind,” said Zheng Hui, who has exhibited excellence in BJJ. “Martial arts has made me more competitive. In sports, I wouldn’t always be serious, but now I take things more seriously.”

In just three short years, Zheng Hui and Zheng How have both managed to earn their stripes in BJJ. The brothers have accomplished great things in the sport and even do very well in competition, with Zheng Hui competing both in Singapore and overseas tournaments while his brother aims to follow in his footsteps.

“I like BJJ because it builds my confidence. Every time I go for a competition, I feel nervous as I don’t know what will happen,” said Zheng Hui. “But afterwards it is always more relieving, I feel that it is ok. It doesn’t matter if you win or lose, it will only help you to gain more experience.” Martial arts has the power to change lives. It imparts a myriad of benefits to practitioners, especially at a young age, endowing them with physical and mental traits that extend the limit of their abilities. One great benefit of training for kids is that they become more socially aware and that they exhibit improved self-discipline — something that the two boys’ mother says she has noticed since they started martial arts.

“Ever since they joined Evolve, I notice that they have a lot of self-discipline. They are more focused on their studies, and I can see that my two boys are getting along well with all their friends,” their mother said.

“Zheng How used to be very quiet, he liked to keep to himself. But now I can see he that he mingles around with others. Zheng Hui, I think a lot of people know him as an outspoken kid, but I notice he is very helpful in class. Evolve has changed their life a lot.” Zheng Hui at one of his BJJ competitions.

And it’s not just their mother who has raved about their progress. Even their Evolve instructors, who are accomplished figures in their fields of expertise have taken note of Zheng How and Zheng Hui’s incredible martial arts journey.

“Zheng How and Zheng Hui, they both have been training at Evolve for almost 3 years,” said Yodteera Sityodtong, one of Evolve’s Muay Thai World Champions. “What I like about them is that they are very easy to teach. They listen and they learn fast, their mom is also very supportive. Because of that, they have improved a lot in Muay Thai.”

“Zheng How and Zheng Hui, when they both started, they were quite shy. The kids didn’t know what they were going to learn, it was a new martial art for them. But after they started to get used to the training, they met new friends on the mat and started to develop their techniques,” said Almiro Barros, Mundials World Championship Silver Medalist and Evolve instructor.

When the two brothers joined martial arts three years ago, they did not know what to expect. It was just something that they wanted to try. Little did they know that martial arts would become a beaming light in their lives, something that would help them develop into fine young men of society.

“Before training at Evolve, I was very lazy, I wasn’t very active. After training at Evolve, I realize that I have to be more active and that I like to participate in sporting events,” said Zheng How. “I used to be overweight, back in 2015, but now I manage to maintain an average weight. I also gained a bit of muscle.” 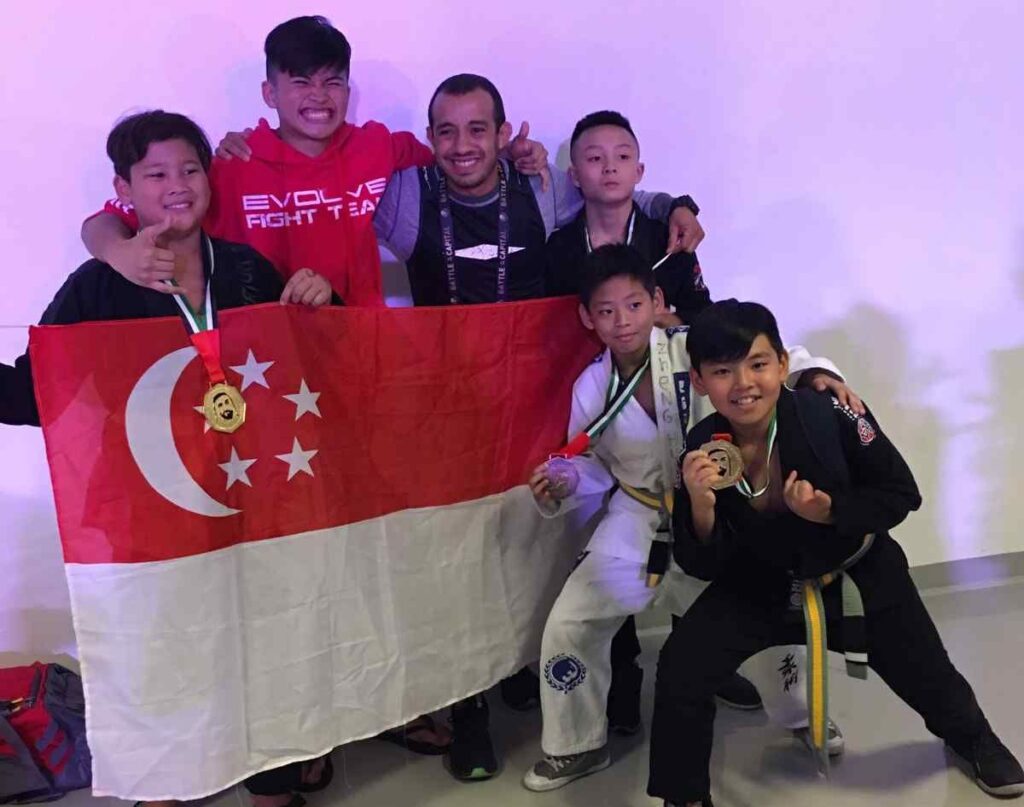 Zheng Hui and his teammates at a BJJ competition.

There are many benefits to training martial arts, not the least of which are physical, mental, and spiritual in nature. From the physical improvement to the enhancement of both your mental and spiritual well-being, martial arts paves the way for people to reach their peak potential.

Learn to love your body. Treat it well and with the utmost respect and it will reward you with a boundless reservoir of energy, immense wells of strength, and waves of mental fortitude. For Zheng How and Zheng Hui, starting martial arts early was one of the best decisions they have ever made.

If you’ve yet to give martial arts a try, there is never a better time than right now! Sign up for a complimentary trial class today!