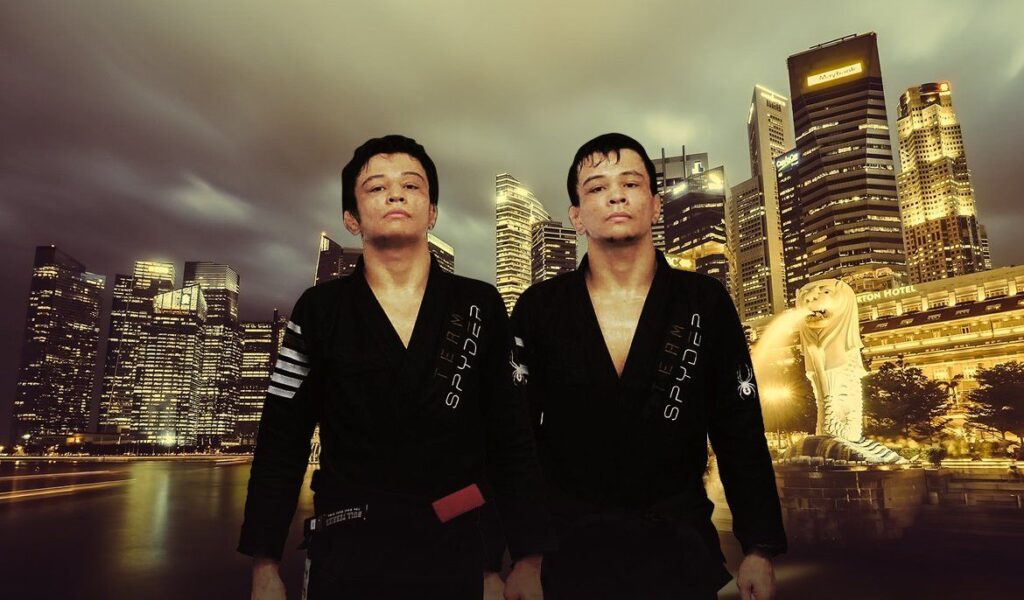 The Miyao Brothers are coming to Singapore.

The highly successful twins, Paulo and Joao Miyao, are renowned for their collection of BJJ World Championships. Together, the Miyao Brothers are two of the most active competitors in the world and have dominated elite-level athletes on the grandest of stages.

Of course, the Miyao Brothers’ techniques were often controversial. With an unmatched obsession with The Berimbolo and other inverted techniques, Paulo and Joao previously relied upon their enduring strategy in almost every competition. The Miyao Brothers’ path was clear: De La Riva and then the Berimbolo to the back, and then attempt to submit the opponent with a bow and arrow choke. And even though the Miyao Brothers employed this same strategy consistently, it was overwhelmingly difficult for anyone to stop them.

This is all in the past, though, because things have changed. The Miyao Brothers are now just as likely to pass guard as they are to play guard, and they’re now using a variety of trending techniques such as passing with a body lock to slice an opponent’s guard and move to a dominant position.

Here’s why you need to be at this extremely rare opportunity:

1) Learn The Berimbolo From Two Of The Best

For those who are thinking, why would I want to learn Berimbolo and not some other proven basic technique? Well, the Miyao Brothers absolutely convinced us all that the Berimbolo deserves recognition as a highly effective technique because they continually implemented the Berimbolo against the best athletes in the world – even when they knew it was coming!

So, whether you want to develop an unbelievable ability to Berimbolo to the back and submit your opponent in competition, or you are merely looking to show-off your inversion skills in your next regular class, you’re going to want to learn these expert Berimbolo tips from the Miyao Brothers.

The Miyao Brothers will be showcasing many of the techniques that they have used time and time again to dominate world-class competitors and claim multiple BJJ World Championships.

These aren’t your ordinary techniques. Instead, you will be learning the methods and strategies that are working right now.

More than anything else at the moment, the Miyao Brothers are relying on the trending technique of using a body lock to pass guard.

While the idea of this guard pass is quite simple – connect your hands, flatten the hips and progress past the legs- there are many advanced strategies, tactics, and techniques that only the Miyao Brothers can share.

The Miyao Brothers are creative at locking their hands and finding the body lock, but what’s most impressive about their guard passing is their ability to react to the movement of their opponent. Their system of response to hip movement and how they continue to pin the hips of their opponent to the mat is invaluable knowledge for a white belt or a seasoned competitor.

In the video above, BJJ Scout recently devoted time to identifying and understanding the current passing techniques that the Miyao Brothers are implementing in competition. If that doesn’t get you excited to learn from these two revolutionary athletes, then we’re not sure what will!

If we were to state one undeniable fact about the Miyao Brothers, it’s that they likely work harder than anybody else in the sport of Brazilian Jiu-Jitsu.

Those who have been fortunate enough to train with or learn from the Miyao Brothers before only repeat the sentiment that these twins are the hardest workers in the game and that they have a deep love for the martial art.

During the 6-hour Miyao Brothers Weekend BJJ Bootcamp, Paulo and Joao will provide visitors with an in-depth exploration of BJJ concepts and ideas. Some of the best value you gain from attending seminars of this sort is not the techniques themselves, but the summarized version of the years and years of priceless knowledge that is packed into the brains of an instructor.

4) A Rare Opportunity To Train With The Miyao Brothers

Unlike many of today’s top competitors, the Miyao Brothers were never the type to stand in front of a camera and open up about their lives. Instead, they just did their thing, and did it really, really well. If you ever wanted to learn a concept or technique from the Miyao Brothers, you’d likely hear them respond with “train more.”

But now, the Miyao Brothers are dedicating an entire six hours to sharing the techniques, strategies, and knowledge that helped them become world-renowned superstars in the world of Brazilian Jiu-Jitsu.