Also known as the Art of Eight Limbs, Muay Thai is arguably the most complete striking-based martial art you can learn.

Unlike most striking-based combat styles, which typically restrict you to only using your hands and feet as weapons, Muay Thai involves using your fists, legs, elbows, and knees to attack your opponent. It also involves some grappling, mostly from the clinch position. Muay Thai fighters learn how to throw devastating strikes from here, plus some cool trips and throws.

Muay Thai isn’t some fancy martial art that has not been proven in real combat scenarios. Muay Thai fighters rarely meet their equal when matched against opponents with different striking backgrounds. Many would argue that Muay Thai is the most effective martial art in the world based on the incredible success top-level Muay Thai practitioners like Anderson Silva have enjoyed in mixed martial arts.

As is the case with any other martial art and most sports for that matter, your stamina and cardiovascular endurance are two of the biggest factors that determine how effective you are as a fighter. Regardless of how well-trained or skilled you are, your technique starts to get sloppy as fatigue creeps in. That holds for training at the gym, competitions, or self-defense scenarios.

Fatigue also affects how well your brain works. Cognitive functions start diminishing when you’re tired and that can lead to poor decisions being made. Martial arts have some similarities to games like chess. You are constantly studying, anticipating, and reacting to things your opponent does. Make the right reads, and you’ll be able to hit your opponent without eating a counter. Zig when you should have zagged, and you might find yourself running into a powerful blow.

If you plan to ever compete as a Muay Thai fighter, you want to start focusing on improving this attribute as early as possible.

Fortunately, stamina and endurance are attributes anyone can improve. The harder you push yourself at the gym and training sessions, the longer you will be able to go without being tired. Here are some exercises you can incorporate into your training routine to improve your stamina for Muay Thai:

1) Running at a steady pace

Unless you live under a rock, you’ve probably noticed that running is a huge part of training for many combat sports. The Rocky movies come to mind, with Stallone running to the iconic theme song of the movies. You might have noticed Floyd Mayweather also did a lot of running – at the weirdest times – if you ever watched one of his pre-fight hype shows when he was an active fighter.

The saying makes a lot of sense since aerobic exercises like running are a great way to improve your stamina and endurance. One of the worst things that can happen to a fighter is to be overwhelmed with fatigue during a fight. It makes you feel helpless, as you simply do not have the strength to ward off your opponent’s attacks. It also weakens your drive to win. You might have been determined to emerge victorious when you walked into the ring, but fatigue has a way of making defeat seem not so bad. It can lead to you mentally checking out of fights simply because you want a way out.

About 30-minutes of running per day is a good place to start. Then, you can gradually improve how much time you spend running as your stamina improves.

Running will help to improve your cardio, and it also serves as a great warm-up and cool-down exercise for Muay Thai.

Swimming is another great cardio exercise you should incorporate into your training. It gives you a great aerobic workout like running does, but it does not put as much stress on your joints. Swimming also provides a few therapeutic benefits you don’t get from running. It helps to improve your blood circulation, reduces soreness, and reduces inflammation.

Going for a swim might be more of an inconvenience than simply going for a run, but the benefits are worth it. If possible, swim first thing in the morning to avoid having to tidy up for the day more than once.

Also known as interval training, this is a great way to train your fast-twitch muscle fibers for power and speed while improving your stamina. Interval training is more time-efficient than running at a steady pace since it only takes a fraction of the time you would need to run to get a good workout.

This type of training involves sprinting as hard as you can for a short distance and getting a short rest. It opens up your lungs and increases your ability to perform while fatigued. 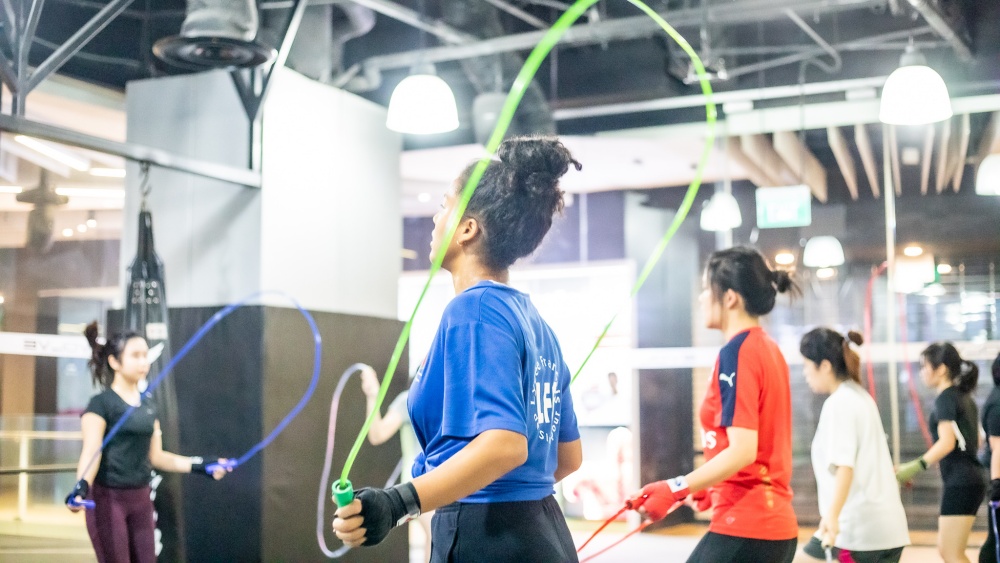 Here’s another exercise that is often a part of combat sports training. Skipping is a great warm-up for Muay Thai as it improves blood flow and raises your heart rate, preparing your body for your Muay Thai class.

Skipping provides you with a full-body workout that helps to build your stamina. It strengthens your shoulder muscles, improves your footwork and coordination, and it trains your fast-twitch muscles. Skipping goes way past simply improving your footwork. It also helps you to build attributes that will make you a better Muay Thai fighter.

Nothing compares to pad work when it comes to stimulating the pace of a real Muay Thai fight. Fighters fight for five three-minute rounds, with two-minute breaks between each round. This same format is typically used when pad work is being done.

To get the most out of your pad hitting session, don’t just throw techniques while going through the motions. Fire as hard as you can, as fast as you can, while maintaining proper technique.

It’s only a matter of putting in the work

Hard work and dedication to your training is all it takes to increase your stamina for Muay Thai. Stop by one of our complimentary introductory classes to learn more about the Art of Eight Limbs and maximizing your stamina!