How To Use Feints And Setups in Muay Thai Hitting the pads or the bag, and landing shots on an opponent in Muay Thai are two very different things. When you first start sparring, it might seem absolutely impossible to land anything at all! The target is moving left to right, swaying side to side, too far away or even too close! Then on top of all of that, they’re hitting you too!

One thing often neglected by many martial artists is the deliberate use of feints to open up opportunities. You need to be fast, fit, and accurate of course, but without openings in your opponents guard, you’ll never land that shot.

What is a feint?

Essentially any time you half-throw a technique that is not intended to land but to make the opponent flinch, that’s a feint. For example, you might throw the jab halfway to your opponents face before throwing a left hook. They believe the shot is coming straight at them so close their guard directly in front of their face, before your hook slides around the side to land. Simple right? Not quite. In order to really “sell” a feint, it takes a little ground work too. This is what we call “setting up” a shot, or combo attack. When used together, feints and set ups can be a devastating combination.

What is a setup? 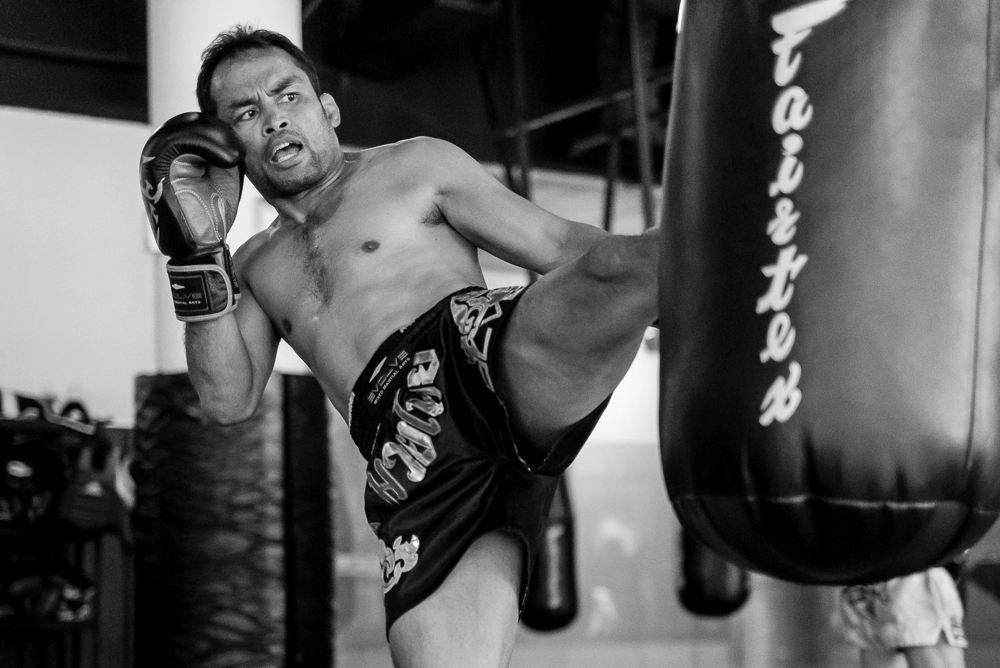 Multiple-time Muay Thai World Champion and ONE Superstar Dejdamrong Sor Amnuaysirichoke is known as a technical fighter with quick hands and lightning feet.

A set up is all the work done leading up to a final feint and genuine attack. It’s important to get the opponent to respect your techniques first so that any reaction gained from a feint is a real one. If you’ve already landed a hard leg kick, or at least thrown a real one, your opponent knows to block it the next time they see one coming. This can allow you to feint one, in order to set something else up.

Let’s study the idea of landing the head kick with feints and set ups. A few things are required for this technique to work:

1. Your opponent needs to be stationary when you throw your high kick

2. They need to have a lowered guard

3. They need to believe a low line attack is coming instead

One effective way of misdirecting the opponent is using the eyes. Generally, during a bout or sparring you should keep your gaze somewhere at the opponents chest, eyes steady but relaxed so that you can see the whole picture using your peripheral vision. If you look at your opponents leg then, they’ll usually expect you to be attacking that next. To begin setting up the head kick, land a few leg kicks and deliberately look at the opponents leg as you do. This doesn’t have to be done all at once. Remember your opponent will be attacking too so take your time, relax and throw a few kicks in this way. Don’t be surprised if your opponent starts to get wise and block these (as they should), that’s exactly what you want.

The effect of a continued attack to the lower half of the body is a false sense of security when it comes to the head. All but the most disciplined fighters hands start to drop a little when they think their head is safe from attack. If you want to ensure this drop, however, continue your attack, but using body shots now too. Hopefully, now you’ll notice your opponents guard start to relax and drop a little. It’s almost time for the feint.

By now your opponent knows two things. Firstly that they definitely need to block your hard low kicks. Secondly, that they need to be careful of your incoming attack to the body. Now is the time to go for that head kick. Not all at once though, we still need to effectively “sell” the dummy shot.

What you want to do here is fake the leg kick again. This can be done in a few ways. If you’re newer to the game, a simple snap of the hip will do. Make the motion of throwing a kick but keep your feet planted, just throw the hip towards the opponent to get a reaction, and then throw a high kick instead. Another method requires a fair bit of speed but is slightly more effective. Actually lift the foot of the kicking leg off the floor and begin the motion of the kick properly, before putting the foot back down, stepping in again with the lead leg in a skipping motion, and then delivering a powerful high kick. And don’t forget to glance at your opponents leg to really mislead them.

With any luck, your opponent expects a leg kick and stands their ground to block on one leg, arms slightly relaxed and oblivious to your true intention. Even if you make a mistake and don’t quite land clean, it’s still going to be a scoring shot and at the very least damage the arm and knock the opponent off balance. You can drill both of these feinting movements on a partner, or on the bag in your own time to really sharpen them up. Try using a mirror or even filming yourself and analyzing whether your feints really look genuine.

Other feints and set up concepts

Setting up the Muay Thai head kick in this way might seem like a complex and long winded way of landing a knockout shot. For someone just starting out, with a little sparring here and there, it may seem almost impossible to relax enough and have the presence of mind to run through something so complex. Don’t worry, feinting and setting up shots are probably two of the trickiest things to really learn in martial arts. With time and practice, you’ll learn how to set up your favorite shots in dozens of different ways.

Start small, try feinting with head shots to land body shots, or in reverse to land shots up top. All you’re trying to do is get a reaction from your opponent, so literally any little movement you make towards them that gets them flinching and thinking counts. Try a few feints next time you spar, and you might just find striking opportunities presenting themselves where before they didn’t.