The Ultimate Guide To Rolling In BJJ “Rolling,” as we call it, is a form of “sparring” and is a way for students to test their skills and abilities against their teammates. Like sparring in other martial arts, rolling helps identify opportunities for improvement, work on strengths and advantages, and continually practice and improve the techniques that require attention.

Students do this by engaging in rounds of grappling with teammates, similar to what you would expect in a competitive Brazilian Jiu-Jitsu environment. However, don’t be mistaken; the intensity is dampened when rolling so that everyone can all stay on the mats for longer.

So, what is rolling? When should you start rolling, how “intense” should the rolling be, and who should I roll with? Further, what are some of the do’s and don’ts of rolling? We’ll tell you all in this edition of Evolve Daily.

And really, the best way to learn about rolling is by watching it. We recommend that you stick around after your beginner class and watch some of the higher-ranked belts roll with each other – it’s a brilliant way to understand Brazilian Jiu-Jitsu.

You’ll see that the two teammates are engaging with each other and are practicing their techniques, movements, and submissions. When one attacks, the other defends. If caught in a submission, such as a choke hold or a joint lock, the student can ‘submit’ by tapping on any part of his partner’s body. The teammate will then let go of the submission, and the two can quickly restart the process. If he is unable to tap the body of his partner, or on the mat, he can yell “tap, tap, tap,” which also indicates a submission.

Students don’t need to prioritize submission attempts when rolling, and they can instead focus on controlling a particular position, or practice defense from specific situations or submissions. It is live training that enables fluid practice and learning.

When Should You Start Rolling? 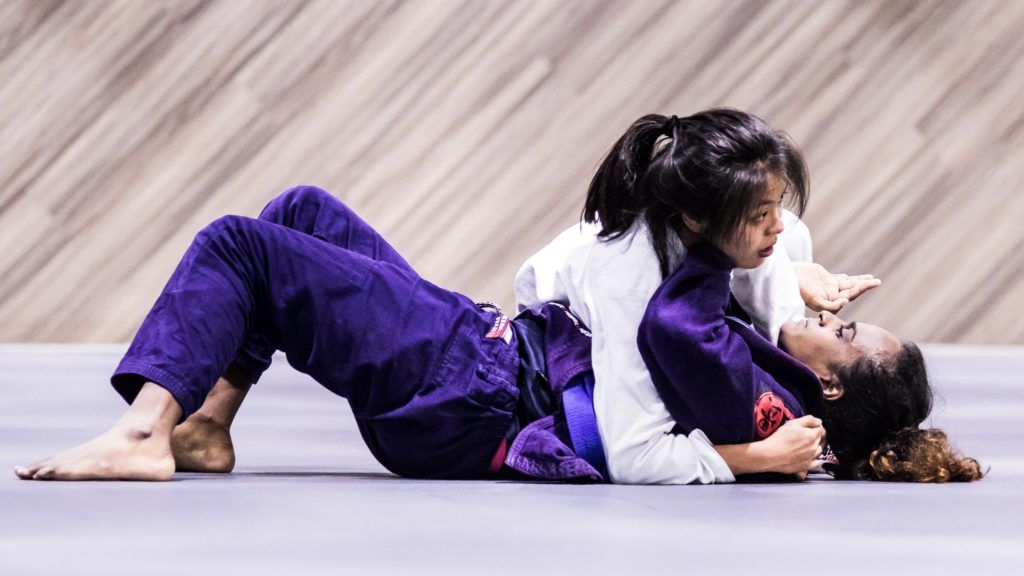 Let’s start by stating that every gym in the world holds a different opinion regarding when a Brazilian Jiu-Jitsu white belt should start rolling.

In some BJJ gyms, a student might need to continue practicing techniques in the beginners class for a couple of months before they are invited to practice these techniques in a live environment. In others, it might just take a lesson or two before they are teamed up with a welcoming partner and gently shown the concepts of rolling.

For this reason, there’s no ‘real’ answer as to when you should start rolling, but here are some general guidelines.

It can take a few months before a beginner starts piecing together the fundamental concepts of Brazilian Jiu-Jitsu. It is only then when a newcomer might begin to feel comfortable participating in the rolling rounds with their teammates. Before then, beginners could start live rolling from specific positions and stop once a sweep, pass, or submission is achieved. By reducing the rolling to specific positions and situations, beginners are able to get a grasp of things bit by bit.

If a beginner participates in full live rolling too early, they will likely feel overwhelmed by the endless possibilities of a five-minute round of Brazilian Jiu-Jitsu.

There is also a point in time, however, in which it is considered too late for someone to start rolling. We don’t believe anyone should wait too long before hitting the mats with their teammates. Rolling is fundamental to piecing together the concepts of Brazilian Jiu-Jitsu, and it helps you stay focused in class as you now understand the relevance of every position and submission. It is also the most exciting and rewarding activity in your Brazilian Jiu-Jitsu learning, so it deserves proper attention.

Ultimately, the best time to start rolling is when your instructor invites you to participate; it’s that simple.

Who Should You Roll With? Picking the right training partner for rolling is an often untaught skill, yet it is imperative to maximize your enjoyment and learning.

For your first rolls, we recommend partnering with a higher-ranked belt. Not only will these more experienced students guide you through the positions and help you understand what rolling is all about, but they also don’t have anything to prove.

A higher-ranked belt has been training BJJ for years, and they are often very experienced at working with beginners. They will help you feel more comfortable, and you can be sure they aren’t going to overwhelm you. Instead, a higher-ranked partner will let you feel and experience all of the positions and examine your responses to every move. If you’re fortunate, the best training partners will help you practice some of the key techniques you learned in class that day.

The higher-ranked belts want you to succeed. The more you enjoy your experience, the more likely it is that you will return and continue training; this is in the best interest of everybody.

Those who are a little more experienced (a white belt with 3-12 months of training, for example), should frequently learn from these higher-ranked belts while also testing their techniques against similarly experienced teammates. That’s not to say that these people should roll with high intensity, but instead, they should practice their techniques against someone with a similar level of understanding.

The same goes for blue belts and higher, some of the most valuable rolls will be the ones against teammates at a very similar skill level. However, it is also vital for these higher-ranked belts to play their role and support the growth of white belts.