WATCH: 5 Things You Must Know About Using The Cross To The Body (Videos) 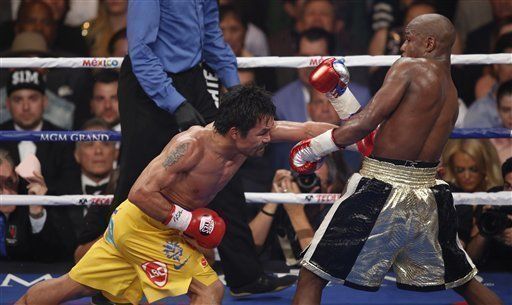 If you’re up against an opponent who is constantly moving, the best punch to use is the cross to the body. It is the fastest way to reach your opponent from the outside and mid-range, giving you easier access to the solar plexus region as well. When thrown correctly, the cross is a powerful punch that has the capacity to knockout your opponent.

The cross, or the straight right, is one of the simplest blows to learn in boxing because it is easy to throw and set up. However, as simple as the cross may seem, there are many fundamental aspects of the cross that both beginner and intermediate boxing students misunderstand.

If there’s someone who knows how to use this punch, it’s WBC Boxing World Champion Yodsanan Sityodtong. Known for his ferocious punching power and KO record, there’s no doubt that he’d know a thing or two about the cross. In this video, Yodsanan shows 3 essential ways to set up the cross to the body. Notice how he sets it up with a jab and a cross before finishing with a cross to the body.

Are you looking to fix your cross? Worry not! Today, Evolve Daily shares 5 Things You Must Know About Using The Cross To The Body:

1) Keep your elbow in

When you throw your straight right, keep your elbow in. Think about keeping your elbow in front of your belly button as you execute the punch. Often times, many beginners will flare their elbows when they throw the straight right. This telegraphs the punch and allows your opponent to come up with a counter.

Nobody’s a better master of the straight right than boxing heavyweight legend Rocky Marciano. In this video above, he uses his favorite punch or the “Susie Q”  (the straight right) to knock out his opponents. Notice how he keeps his right elbow close to his body as he throws his Susie Q.

2) Always keep your guard up

Many times, beginners will drop their left hand from the regular guard position close to the cheek when throwing a cross. Remember to always keep your hands up – whichever punch you decide to use!

Former WBA, IBF, WBO (2-time) and IBO heavyweight boxing world champion Wladimir Klitschko, is also known for using the right cross to devastate his opponents. In the first few seconds in the video above, notice how he is able to land his cross flush on his opponent’s face. Even as his opponent drops down, dazed from the punch, Klitschko moves his hand back up, recovering his guard.

3) You can throw the cross on its own

The cross is so powerful that it can be thrown in isolation with the same results. However, you should ensure that you are rotating your hips and driving from the legs.

In this fight against Francois Botha, former boxing heavyweight world champion Mike Tyson was looking for retribution from his notorious fight against Evander Holyfield. Watch Tyson do what he does best, and knock out Botha with 12 seconds left in the 5th round with a short right.

4) The power comes from the legs

Many boxers make the mistake of solely using one’s arms to land a punch. Unfortunately, this isn’t where your power comes from. Don’t waste your cross and use your hips, legs and core to throw your punch with both speed and power. When you’re feeling more comfortable with the cross, try shifting your stance and putting all your weight on your back leg. When it’s time to throw the punch, transfer the weight to your front leg.

In this video, one of the fastest hands in the business, former boxing middleweight world Champion Sergio Martinez takes on Irish fighter Matthew Mackin. Watch Martinez’s footwork, which he uses to create angles and find openings. Regardless of which punches he throws, just like any professional boxer, Martinez pivots his hips and drives with his feet for more power.

5) Use your first two knuckles Vitali Klitschko is the first professional boxing world champion to hold a PhD degree, and in reference to his punching power, Klitschko’s nickname was “Dr. Ironfist”.

Because the cross is thrown in a straight line, you must align the first two knuckles (your index and middle finger) in your hand with the bones in your forearm. The knuckles should be out a little further when punching, in order to drive them in farther.

As with all new techniques, you should drill with a partner using minimal resistance before using these techniques in sparring. By adapting these concepts into your training repertoire, you’ll eventually be able to use these against your opponent during sparring and bring the fight into your control.