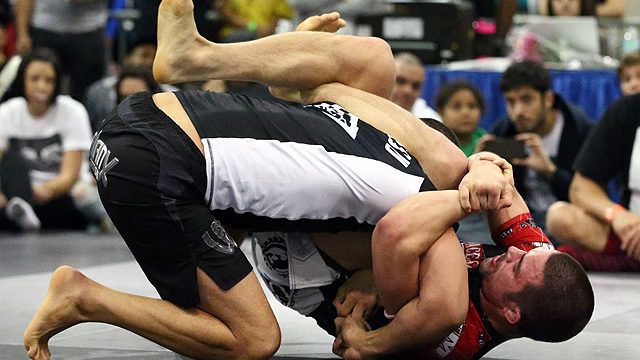 There are few submissions as iconic in Brazilian Jiu-Jitsu (BJJ) as the Triangle Choke. It is so widely utilized in the sport that you would be hard pressed to watch a day of BJJ competition and not see at least a dozen Triangle Chokes. While almost all BJJ practitioners are familiar with the standard Front Triangle, there are other variations of the Triangle Choke that are just as effective. In an attempt to help you understand the mechanics of each of these Triangle variations, we have put together an explanation of each maneuver and when it is best to use them. Enjoy!

Like all other variations of the Triangle Choke, the Front Triangle works by cutting off one of the opponent’s carotid arteries with your leg, while the other is cut off by the opponent’s own shoulder. The basic set up from Guard starts by establishing a wrist control grip on each of your opponent’s arms. Then move one of your feet to your opponent’s hip as you stuff his opposite hand into his chest. Use your foot placement on his hip to drive your hips up and closer to his neck as you throw your leg over his shoulder and cross your ankles, creating the one-arm-in, one-arm-out scenario that is necessary for all Triangles. Immediately grab your opponent’s head to control his posture. Then grab the shin of the leg over your opponent’s shoulder, and pull it towards you so that you can lock your foot under your other knee. If you are having trouble locking up the Front Triangle, try underhooking your opponent’s free leg or arm to “cut the angle” and end up perpendicular to him.

From your fully locked up Front Triangle, squeeze your knees together and pull down on your opponent’s head, closing his arteries and forcing him to tap.

Take the leg that is controlling one of your opponent’s arms and move it to the other side of his body, placing it on his hip. Your leg should now be over his shoulder and extending to his hip, similar to a seatbelt. Then, reach down and grab that foot, pulling it up towards you. Similarly to how we did with the Front Triangle, we can place our foot on our opponent’s hip and “cut the angle,” which allows us more room to lock up the choke. Go ahead and lock your foot under your knee, putting the Back Triangle in place.

While we can absolutely squeeze our knees together to strangle our opponent, another great finish is to utilize an Armlock. By locking up the Back Triangle, one of our opponent’s arms will be forced away from their body. This arm is vulnerable to Kimuras, Straight Armlocks, and Wrist Locks. How you like to finish is completely up to you!

The best time to use the Side Triangle is from Side Control when you have a far side underhook and one of your opponent’s arms is between your legs. Switch your hips so that you are facing your opponent’s head. Use your hand to push the head down as you step your top leg over. From here, reach back and grab the wrist of the arm that is in between your legs, pulling up so that you can lock your leg in the crook of your knee just as we have with all of our other Triangle Chokes. The end position of the Side Triangle should be one of your opponent’s arms and head locked in the Triangle while you are facing away.

While it is entirely possible to finish your opponent by squeezing your knees and strangling him, a more efficient way to finish the Side Triangle might be with a far side Straight Armlock or Kimura. As your opponent’s other arm is trapped in your Triangle, he will not be able to defend as you attack his arm!

As Triangle Chokes utilize the legs to attack the opponent, many newer practitioners struggle with them as their legs are not yet dexterous enough to control the opponent effectively. While it is perfectly normal to feel that these Triangles are too complex in the beginning, make sure you stick with them as they are likely to become a useful weapon in your arsenal.