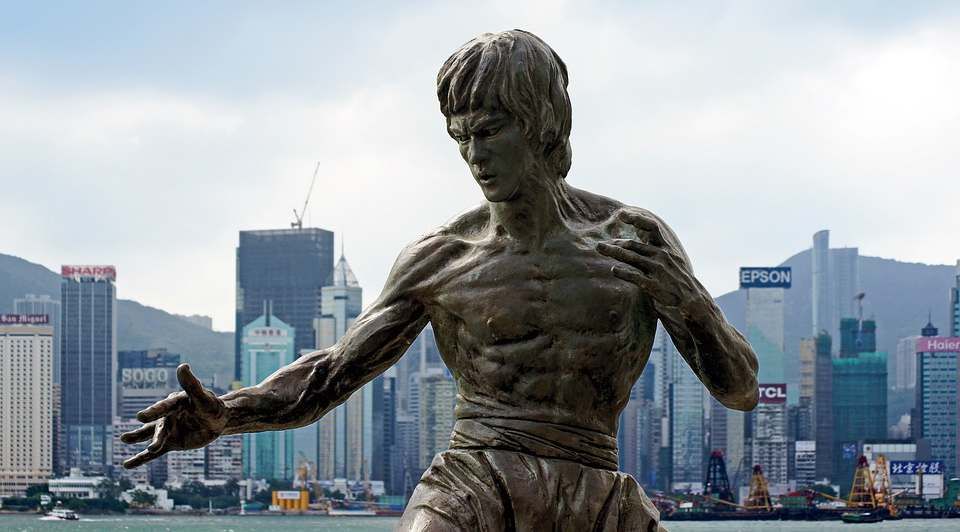 Bruce Lee is without a doubt the most iconic martial arts superstar in history. He was born on November 27, 1940, in San Francisco, California, the fourth child of a Chinese father, Lee Hoi Chuen and a mother of Chinese and German ancestry named Grace.

Lee’s father toured as an opera singer when he was a child, and also served as his first martial arts instructor, teaching the young Lee how to defend himself from the notorious Hong Kong street gangs that proliferated in the 1950’s. Developing a love for martial arts, Lee later studied Wing Chun under Sifu Yip Man until the age of 18. He took his martial arts background further by training in western boxing.

Jeet Kune Do, Lee’s own creation, was developed in 1965 out of his desire to formulate his own martial arts discipline. Lee aimed for a practical style to be used for street fighting. He envisioned a martial art that would go beyond the usual parameters and limitations other practices offered.

With a flair for drama and a passion for theatre, Lee eventually became the quintessential Hollywood martial arts superstar. Following his sudden and shocking death in 1973, Lee was immortalized by millions of his beloved fans all over the world as the greatest martial artist who ever lived.

Lee was truly a remarkable man and an inspiration to many. If you have never seen any of his films, right now may be a great time to start. Today, Evolve Daily shares four of Bruce Lee’s most popular films.

Fist of Fury released in 1972 and was Bruce Lee’s second major role after The Big Boss just a year prior. Portraying the character of Chen Zhen, Lee fights to defend the honor of the Chinese against Japanese enemies and also to bring justice to those responsible for his master’s death.

This film really showcased Lee’s martial arts mastery, bringing to life his flashy kicking techniques and handiwork with his signature weapon — the nunchaku.

In a memorable scene, Lee’s character visits a rival dojo and single-handedly defeats all of its students including their sensei, utilizing the nunchaku in emphatic fashion.

In the final battle, Lee faces his Japanese adversaries for the last time. He enters the dojo wearing his iconic all-black Kung Fu drab, defeats all the students inside and then takes on their master who wields a samurai sword. Lee uses his quickness and elusiveness to evade his opponent’s attacks and then uses the same sword to kill his foe.

Lee then moves on to a garden fight scene where the story somehow transitions to him removing his shirt to show off his six pack while fighting the last boss. Coincidence? Probably not.

2) The Way Of The Dragon

Written and produced by Bruce Lee himself, who also starred in the lead role, The Way of the Dragon was released in 1972.

Set in the city of Rome, Tang Lung as played by Bruce Lee goes against gangsters pressuring his friends to sell their restaurant. The gang boss hires Japanese and European martial artists to go against Tang but they are unable to defeat him.

The movie also stars the legendary Chuck Norris, an American martial artist who is hired to take on Lee’s character in a showdown at Rome’s famous Colosseum. The iconic fight scene is one of the most talked-about in martial arts movie history.

The fight scene really showcases the fluidity and mastery of Lee’s hand-to-hand combat skills in all its glory. Both Lee and Norris begin the battle by unrobing to no doubt add dramatic flair.

The two then proceed to slug it out in a back-and-forth affair that leaves both men exhausted, with Lee of course emerging the victor.

In what was Bruce Lee’s last completed film before his untimely death, Enter the Dragon was released in 1973 and featured Lee as a martial arts expert recruited to infiltrate a group involved in the Opium trade and white slavery. He later finds out that the group was responsible for his sister’s suicide, making the final battle extremely personal.

Widely considered one of the greatest martial arts movies of all-time, Enter the Dragon owns the distinction of being preserved in the United States National Film Registry by the Library of Congress in 2004, selected for being “culturally, historically, or aesthetically significant”.

The final battle is perhaps Lee’s most memorable. Lee’s final opponent escapes into a hall of mirrors, and he is forced to deal with reflections of his own self. To overcome his disadvantage, Lee shatters the mirrors and proceeds to defeat his foe.

The film was released on July 26, 1973, just six days after Lee’s untimely passing.

4) The Game of Death

Bruce Lee passed away while making The Game of Death, and as a result was unable to finish the film despite shooting over 100 minutes of footage before his passing.

He stopped filming The Game of Death midway after receiving an offer from Warner Bros Studios to make Enter the Dragon, with a budget then unprecedented for the martial arts action movie genre totaling to nearly $1-million.

After finishing Enter the Dragon, Lee went back to work on The Game of Death but then shortly after died of a cerebral edema.

Donning his most iconic look, Lee battles Abdul-Jabbar wearing the infamous yellow and black striped tracksuit which has become Lee’s signature style. Lee then proceeds to defeat the long and rangy basketball player in one of the most memorable fight scenes in history.

Which is your favorite Bruce Lee film?