The 3 Best BJJ Takedowns For Beginners 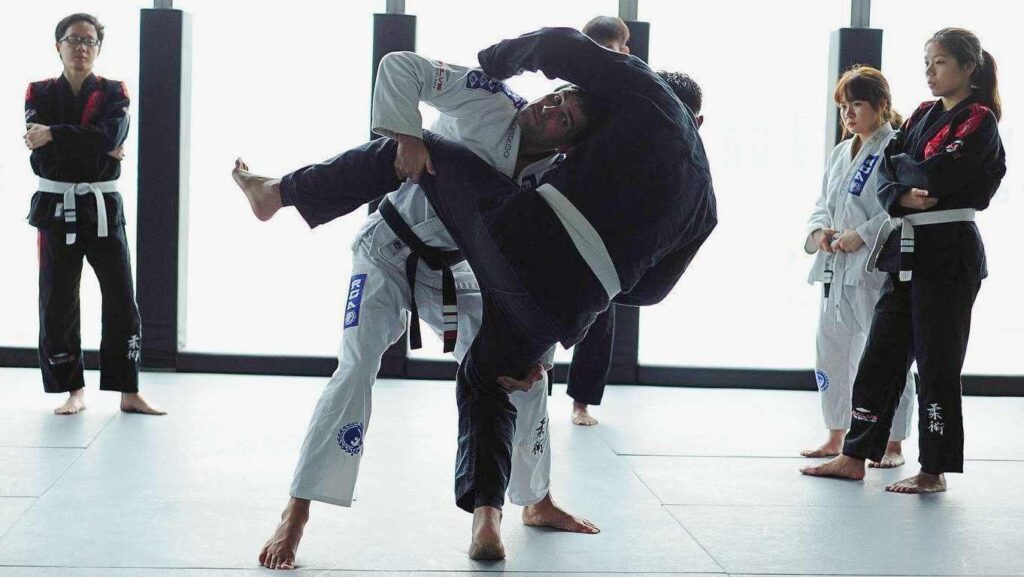 There are many Brazilian Jiu-Jitsu (BJJ) practitioners who are intimidated by the stand-up aspects of grappling, which tends to cause their takedown techniques to lag behind the rest of their grappling game. This can be caused by a number of reasons, usually due to insufficient instruction or practice. While this feeling of intimidation is valid, it is important for every BJJ practitioner to right this wrong and learn a handful of takedowns that work for them. In order to help you start this process, we have compiled a list of takedowns that are perfect for those who are just starting to enter the standing portion of Brazilian Jiu-Jitsu.

The ankle pick takedown is perhaps the most effective technique that has been adapted from folkstyle wrestling for Brazilian Jiu-Jitsu. Due to its relative simplicity in both sports, it is often one of the first techniques taught to beginners. This technique is executed by the attacker pushing his opponent’s head over one of his knees, causing that leg to become immobile due to the excess weight. As the leg is now not able to move, or at the very least very difficult to move, the attacker can finish the takedown by stepping in to block the target foot with his own before reaching down and grabbing the ankle. From there, all that is needed is to lift the foot into the air causing the opponent to fall.

Unlike some other takedowns which consist of high amplitude throws and slams, in the course of an ankle pick neither grappler is lifted up into the air. Instead, the victim simply has one of his feet plucked out from beneath him causing him to safely fall onto the mat.

The ankle pick also has a low penalty for failure if the attacker is not successful in his attempt. Unlike a traditional wrestling shot, the ankle pick does not require you to enter underneath your opponent, eliminating the potential of getting crushed under your opponent’s weight and subsequently falling victim to a Guillotine Choke.

The ankle pick allows grapplers who are just starting to focus on their takedown techniques to go for a takedown in live rounds without getting dismayed. This makes it a perfect technique to learn if you are not comfortable with your stand up game and want to develop takedowns to round out your game.

Roughly translated to “big hip throw,” O-Goshi is one of the first techniques taught to newcomers in Judo, the sister sport of Brazilian Jiu-Jitsu. While the translated name may make it seem like this takedown requires a high-impact slam in order to achieve, this is a misconception. If done correctly, O-Goshi is one of the most controlled takedowns in all of the grappling arts making it perfect for beginners.

While there are a plethora of ways to initiate this takedown, the preferred way for a beginner to learn is by utilizing an underhook and grabbing your opponent’s belt while your other hand maintains a sleeve grip. From here you can step in and lower your hips until they are under the opponent’s, then extend your legs, lifting him off of his feet. At this point, your opponent is only being held up by your body, specifically your legs and hips. A quick pull on his sleeve and belt will twist him up and over the fulcrum off your hips, causing him to fall onto the mat. Make sure you pull up with the grip you have on your opponent’s sleeve so that he falls on his side. There are two reasons why you want to do this. The first is that it causes your opponent to fall on his side, preventing him from taking the impact of the throw straight onto his back. The other is that it extends the opponent’s arm, putting you in a perfect position to enter into an armbar.

As stated above, the O-Goshi takedown is completed by pulling the opponent up and onto your hips, then pulling him over that fulcrum. This mechanic makes the throw an excellent choice for beginners to practice, as they will be able to balance their partner on their hips and lower him to the mat in a controlled manner, eliminating the prospect of a big slam. Once the O-Goshi has been perfected, you will have a firm understanding of the mechanics behind a hip throw and are ready to move onto some of the more advanced hip throws.

It would be very difficult to compile a list of takedowns for beginners without mentioning the double leg takedown. The double leg takedown is perhaps the most utilized takedown in all of martial arts, as it widely popular in MMA, BJJ, submission grappling, and wrestling. This is undoubtedly due to the simplicity of the technique which is easy to understand.

The first step that must be taken in order to successfully execute a double leg is to “change levels,” bringing your head down to your opponent’s belt line. From here you can initiate your penetration step, grabbing your opponent’s legs, and driving through. Once you have practiced the technique repeatedly you will notice that you will begin to catch your opponents off guard, catching them when they least expect it.

While the double leg can be done in a big explosive manner, it is not necessary to do so. Make sure when you are practicing to start slow and build from there, giving your partner plenty of time to break fall.

While there are many more effective techniques to take down your opponent, these are some of the best to start learning if you are new to the stand-up phase of BJJ. Many practitioners shy away from takedowns but by finding the right training partner and drilling these three takedowns repeatedly, you will quickly find that you are no longer intimidated by stand up grappling as you know exactly what to do in order to take the engagement to the ground in an efficient manner.