WATCH: 7 Of The Biggest Rivalries In Boxing (Videos) 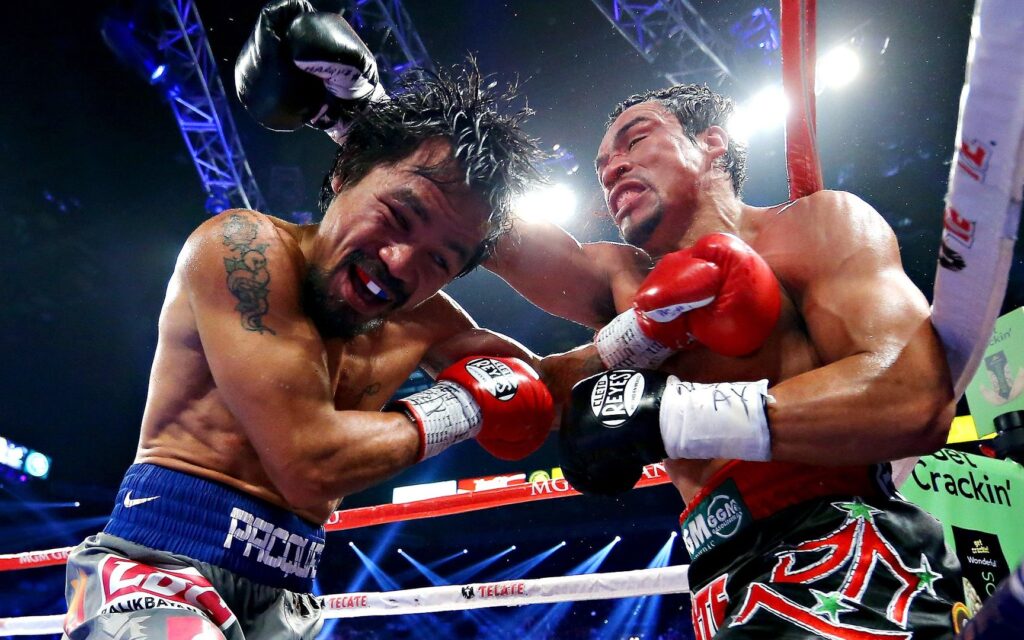 There is nothing more exciting than watching two men fighting toe-to-toe in a boxing match. And when there’s a rivalry between those two fighters, the effect is multiplied each time they step into the ring to face off. There is no doubt that rivalries bring the best intensity, passion, emotion, and entertainment out of fights.

Today, Evolve Daily takes a look at 7 Of The Biggest Rivalries In Boxing:

“Joe Frazier, I’ll tell the world right now, brings out the best in me. I’m gonna tell ya, that’s one helluva man, and God bless him.”

– Muhammad Ali on Joe Frazier after their third match, The Thrilla In Manilla.

The rivalry between Muhammad Ali and Joe Frazier is perhaps the most famous rivalry in boxing history. Ali was the master boxer, and Frazier, the relentless bull that never stopped coming forward.

Their fights were the perfect representation of speed vs power; the flamboyant trash talker vs the humble blue collared fighter. The three fights Ali and Frazier had are undoubtedly some of the most heavily contested fights in heavyweight boxing history that could never be matched.

“True champions have a deep reservoir of will to succeed, to perform, to rise to the highest level and beat the guy in front of them. These two fighters have proven that that’s who they are.”

Perhaps the most popular boxing rivalry of our time is the one between Manny Pacquiao and Juan Manuel Marquez. The more these two fighters fought, the more they proved to the world just how evenly matched they really were.

Their first three fights had Pacquiao up 2 – 1, but all of them could’ve gone either way, proving just how contested they actually were. Pacquiao and Marquez never failed to provide fans with constant back and forth action in their fights, and their rivalry went down as one of the greatest of all time.

“Gatti-Ward is a piece of boxing vernacular that elicits waves of memories, some heavenly, some harrowing, some heart-stopping, all humbling.”

The trilogy of fights Arturo Gatti and Micky Ward had was like nothing ever before seen in the sport of boxing. In their fights together, these two men displayed a tremendous amount of heart, never once giving in to the other.

It’s almost impossible to watch any of their fights without having your heart rate increase rapidly. Gatti and Ward had huge respect for one another and each brought the best out of the other, giving fans around the world some of the greatest fights in the history of the sport.

“The most entertaining fight series in recent boxing history.”

Israel Vasquez and Rafael Marquez fought a total of four times, and only one of those four fights went to a decision. Vasquez and Marquez provided one of the fiercest rivalries in boxing, their second fight and third fight was named Ring Magazine’s fight of the year for 2007 and 2008.

Both fighters were perfectly even with two victories over the other. And while a fifth match was in talks to be made, it was highly discouraged due to the amount of punishment both fighters had taken in their fights together.

“This is what it’s all about ladies and gentlemen. Pride, honor, revenge; Mexican boxing at it’s best!”

Mexican fighters are loved by boxing fans for one simple fact: they never back down. Combining aggression, pressure, and heart, the Mexican style of fighting is the perfect formula for an entertaining fight. And when you have a rivalry between two revered Mexican fighters like Marco Antonio Barrera and Erik Morales, there are bound to be some fireworks.

For three fights and 36 rounds, Barrera and Morales never stopped testing one another. The intensity of the fight and the fighting spirit displayed by the two fighters will go down in history as perhaps one of the most famous rivalries in all of boxing.

“The combinations were unbelievable. They both were just bashing each other to the point where I felt like there was sweat coming out of the TV screen!”

Unlike the other fighters and rivalries on this list, boxing legends Marvelous Marvin Hagler and Thomas Hearns only met once in the squared circle. But anyone who has watched the fight between Hagler and Hearns in 1985 would agree that their one and only fight is enough to establish their rivalry as one of the most heated in the history of not just boxing, but any combat sport.

Billed as “The War”, their fight is considered by many to be one of the finest and most grueling boxing matches in history. This is largely due to the amount of action, drama, and heated exchanges in the build up and during the actual fight itself. The first round alone is widely regarded as perhaps the greatest and most exciting round in boxing history. Just watch the entire fight above – it would be almost impossible to take your eyes off the screen!

“It was viewed as good vs. evil. The good was Evander.. versus Mike, who at that time was the ex-con.. But Evander was perceived to have no chance against Mike.”

Mike Tyson and Evander Holyfield’s rivalry was one birthed out of respect and reverence for one another. And many forget that their rivalry didn’t only start when they were popular world champions in the 90s, it started when they were both were vying for a spot in the Olympic team in 1984. During that time, the two future hall of fame boxers trained together and were said to have deep admiration for the skill and abilities of the other.

And when the two reached the pinnacle of the sport in the 90s, it was only natural that they would finally get to meet in the ring. And although their fights have been largely surround by controversy, Tyson and Holyfield certainly gave the fans one of the greatest and most exciting rivalries and fights the world has ever seen.

So have these incredible rivalries motivated the fighter in you? Remember, an unrelenting fighting spirit isn’t limited to just the boxing ring; it applies to life as well. Hopefully, these rivalries will inspire you to never back down when the going gets tough.