What Is The Most Powerful Punch? 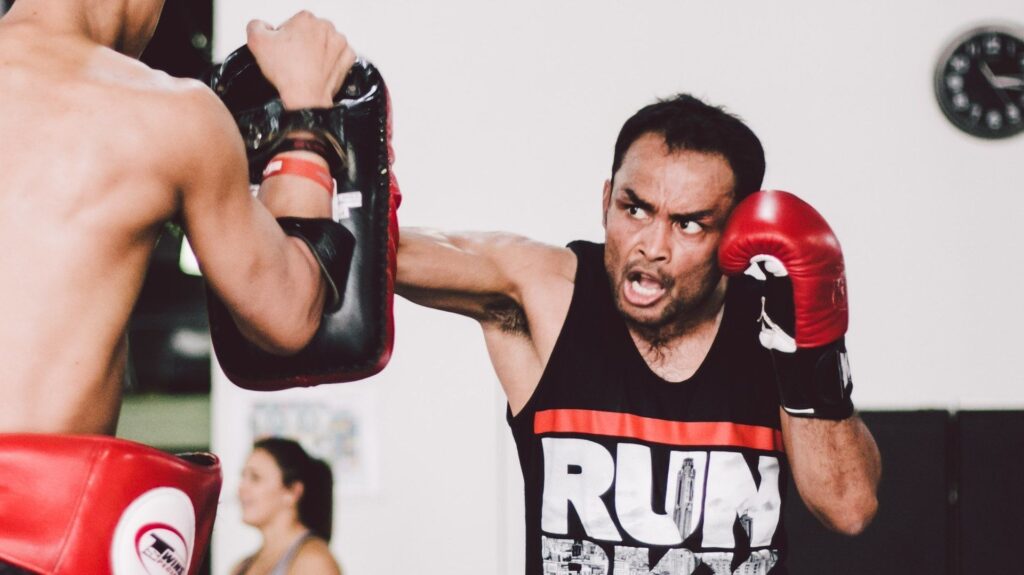 What is the most powerful punch? This is one of those questions, like Bruce Lee vs Chuck Norris, that has emotional and opinionated people on both sides of the fence. A more contemporary example would be the recent Mayweather and McGregor fight.

So the question is probably better asked as “What punch generates the most power while both you and your opponent are stationary (while still allowing the puncher to rotate and step with the punch).” Approaching the question this way gives us an opportunity to delve into the science of a punch and explore exactly what makes a punch powerful.

So let’s dip our toes into a bit of science, and then speculate wildly about the best punches.

The Science Behind Punching Power

When discussing the science of a punch, there are many ways to approach it. Looking at the mathematical basis for understanding force (Impulse-Momentum Relationship) as well as the factors that are involved in that math (velocity, mass, structure) give you the best basis for wrapping your head around the issue.

This concept is derived from Newton’s Second Law of Motion. To oversimplify it, this refers to the physics of the mass and velocity of your punch. You can think of this as the combination of the speed of your punch and the strength behind it.

For our purposes, Newton’s Second Law of Motion is capable of being simplified into (Force = Mass x Acceleration).

The factors in that equation can be further and more accurately expressed as Kinetic Energy (KE) = 1/2 mass x velocity^2. This is the formula that is referred to as the Impulse-Momentum Relationship. This formula allows you to get much more specific with exactly what is happening to generate the force of a punch. It shows that the overall speed (velocity) has more of an impact on the energy of your punch than the weight (mass in the punch) since velocity is squared. Interestingly enough, the science shows that it is actually more important to throw a fast punch than a heavy punch when you are trying to generate power. Both are important though of course, otherwise, a very fast jab with no body weight behind it would be the most powerful, while that is obviously not the case.

A semi-truck rolling down an incline at 5 km/hr is unlikely to do as much damage as a Honda Civic cruising at 50 km/hr.

This means that the most powerful punches will:

1. Maximize the weight (mass) behind your punch*

2. More importantly, maximize the speed (velocity) of your punch.

* You can maximize the punch’s mass by engaging your whole body, the shoulder, hips, and legs (more on this when we talk about the kinetic link) in the punch.

The Kinetic Link And Body Structure

While understanding the Impulse-Momentum Relationship gives you a mathematical basis for understanding the forces that make up a punch, it doesn’t really explain what goes into those factors. I mentioned previously that you must try and maximize the mass behind your punch by engaging your whole body. To understand what this really means, you have to understand the kinetic link.

The kinetic link is the reason a pitcher can throw a fastball at amazing speeds, or a competitive swimmer can cover a huge amount of distance with their initial dive. It is the linking up of the muscles throughout your body to accomplish a single movement. A powerful punch will activate multiple muscle groups, the trick is to be able to link these different groups together in one fluid motion. Getting every muscle from your calves to your forearm to seamlessly support a single action. The better you can link these muscles together without a hiccup, the faster the movement will be – this results in the maximum velocity and force possible.

Studies have been done comparing martial artists and other athletes to test this link out. Interestingly enough, years of training and cultivating this linking of the body allows a martial artist to actually strike harder than a physically stronger and faster athlete. There is even some science showing physical changes in the brain take place after years of training these movements into your body.

If you want to go deeper with the Kinetic link concept, Nerdist.com and Popular Mechanics had some great articles.

As for body structure, the comparison can be made to a broken bat. A solid bat, a single piece of wood, can transfer large amounts of force into a ball. A broken bat, when it strikes a ball, will absorb a large amount of the force back into itself rather than the ball. This applies to a punch as well. Poor form and structure in your punch will result in your body absorbing back a percentage of the power of your punch. You must train yourself to reduce breaking points in your structure and to utilize your arms as solid striking objects. Correct joint alignment will significantly increase the effectiveness of a punch and will protect your joints.

So Then, What Punch Is The Most Powerful?

Now that we understand some of the science that goes into the power of a punch, we can have some fun looking at the more effective punches and the force they generate.

It is safe to say that the more powerful punch will be coming from the rear side of the body, based on the fact there is simply more mass and momentum that can be generated when bringing the rear side forward (except for the spinning back fist of course).

So, the most powerful punch will be coming from the side that is pulled back. It will also need to utilize a full kinetic linking of the body, meaning you will need to be stepping or twisting with the punch to fully activate a range of muscle groups. This leaves us with a few options.

We can eliminate the cross since it is a direct attack and has limited options for a full utilization of core muscles. Many fighters feel their straight cross is their most powerful punch, and it may very well be, but in general, the straight cross is just not able to utilize as many muscle groups as something like a proper hook.

Something else we didn’t talk about is target areas, and why certain punches are so much more effective than others sometimes. A hook will often land across an opponent’s jaw, which amplifies its ability to KO someone. Let’s say we aren’t worrying about the target areas and we are simply trying to see which punch lands harder – we can most likely then eliminate the uppercut. Although very effective, an uppercut is dependent on your opponent’s position and movements to really be effective, and although powerful, a punch traveling up can never compete with one going sideways or down for brute force.

That leaves us with the hook, the overhand, and the spinning back fist.

Though the style and technique are really going to matter here, it is likely that the typical stepping overhand generates more force than a typical hook. There is more working in the overhand’s favor – gravity, increased range of movement, and the ability to put the entire body into it. A hook can bring together tremendous force, but it lacks the added element of dropping into the attack. For the same reasons the overhand beat out the cross, the overhand also beats out the back fist.

So, based on this, the stepping overhand is the most powerful punch.

What do you think?

The 5 Secrets to Developing a Knockout Punch 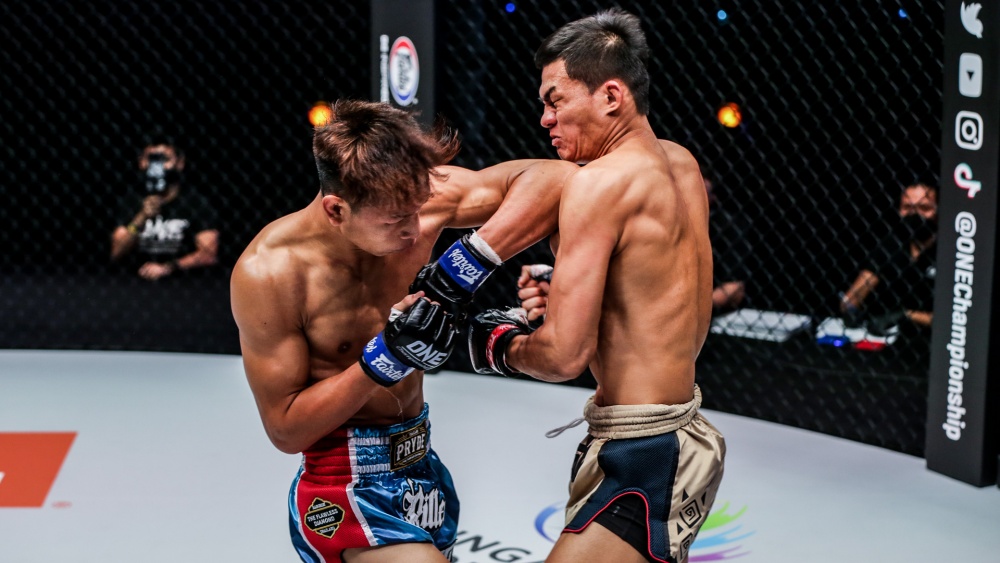 Image via ONE Championship
Beginners Wednesday

Elbows are one of the weapons that are unique to Muay Thai. Most striking-based martial arts tend to be restrictive regarding the weapons you are allowed to attack with. For example, boxing restricts you to… 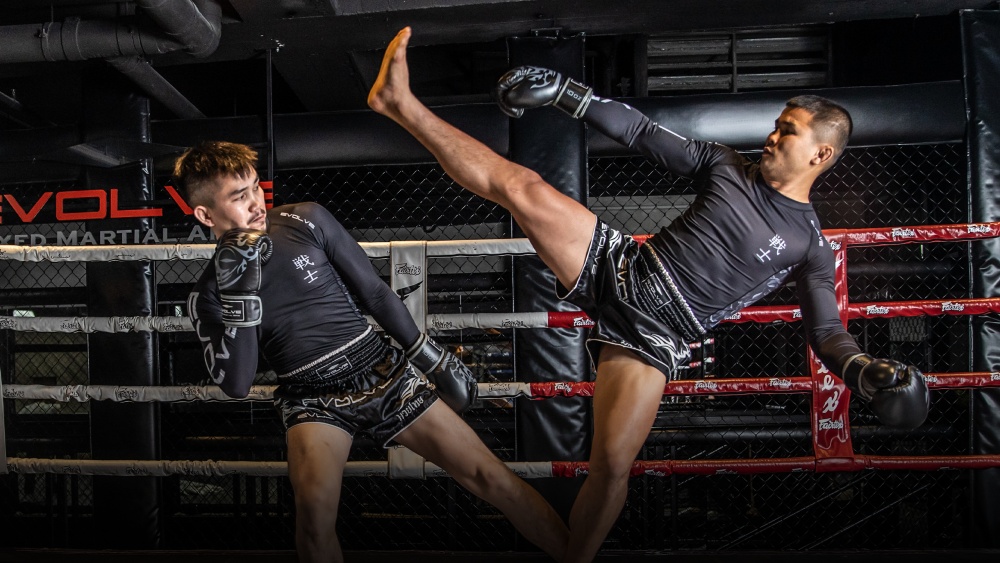 Muay Thai is widely regarded as the most effective striking discipline on the planet. Also known as the “Art of Eight Limbs” (as competitors can use their fists, elbows, knees, and legs), Thailand’s national sport…