WATCH: 13 Of The Most Explosive Flying Knee Knockouts In MMA (Videos)

In the world of combat sports, very few types of knockouts are as equally devastating, flashy and technical as the flying knee. A technique derived primarily from the art of Muay Thai, the flying knee is one of the riskiest moves to pull off, especially in a sport like Mixed Martial Arts, where the slightest mistake could leave you flat on your back and at the mercy of your opponent’s ground and pound or submission attempts. But if executed perfectly, the flying knee has the KO potential of a sledgehammer hitting you right in the face.

Today, Evolve Daily takes a look at  13 Of The Most Explosive Flying Knee Knockouts In MMA:

This is the fight that truly demonstrates what UFC’s current Featherweight Champion, Jose Aldo is like in the ring – unique, explosive, and ruthless. It took Aldo no more than eight seconds to demolish Cub Swanson at WEC 41 and earn himself a shot at his first world title. And he did it with one of the most incredible flying knees in MMA history. A closer look will convince you of why this particular knockout deserves the #1 spot on this list; Aldo actually lands not one, but two knees in mid-air!

With this thunderous, bone-crushing flying knee knockout, Timofey Nastyukhin sent shockwaves through the entire MMA world and became one of the most feared fighters in ONE Championship. Nastyukhin also made sure he finished the job, throwing a soccer kick on fan favourite Eduard Folayang before the referee stepped in to stop the fight. It’s no wonder why this flying knee won MMA Mania’s 2014 Asian MMA Knockout of the Year.

Norifumi “Kid” Yamamoto is known for many things; his aggressive, well-rounded fighting style, his wins over some of the biggest names in the sport, and his always controversial persona. But the Japanese MMA legend is also known for his dramatic, record-breaking knockout over Kazuyuki Miyata at PRIDE Hero’s 5.

Back in 2006 when Yamamoto landed a sensational flying knee on Miyata to finish the fight in just 4 seconds, he not only claimed his sixth consecutive knockout victory, he also went straight into the record books with the fastest ever knockout in a major MMA organization!

MMA fans can always count on former UFC Interim Welterweight Champion and WEC Welterweight Champion, Carlos Condit to put on a Fight of the Night performance whenever he enters the cage; after all, he’s already won that award four times since his debut in the UFC. But against Dong Hyun Kim at UFC 132, the striking ace collected the paycheck for a different type of award, the Knockout of the Night. And he earned it with a beautiful flying knee and a barrage of devastating hooks to his floored opponent.

Back in 2006, Spencer Fisher was the Diego Sanchez and Clay Guida of today; tough, determined, and never afraid to engage in an all-out war with the man standing across the cage. This particular fight with Matt Wiman at UFC 60 is perhaps the best example of what Fisher was like as a fighter. The two men battled it out in an entertaining, action packed brawl for one and a half rounds. And after another exhilarating exchange halfway into the second round, Fisher launched himself into the air for a flying knee which landed square on Wiman’s temple, dramatically ending the fight.

UFC 189 will go down in history as one of the biggest and most memorable events in the history of the sport for many reasons. One of those reasons is the unbelievable, back-and-forth fight between Thomas Almeida and Brad Pickett. After surviving getting knocked down twice by Pickett, Almeida rebounded just 28 seconds into the second round by landing a crazy flying knee, ending the fight and winning the Knockout of the Night.

Another reason for UFC 189’s success is the wild scrap between Jeremy Stephens and Dennis Bermudez. For two rounds, both men took turns taking control of the fight and pushing the other to his limit, never giving up on throwing everything with the vicious intent to end the fight. And just 32 seconds into the third round, the fight came to a shocking halt when Stephens jumped up and landed a bone-shattering knee. What’s even more amazing about this flying knee is that Stephens landed it while moving backwards!

Back in 2009, Nick Pace was still just a rising MMA fighter with a successful amateur career and one professional win to his name. But it took him less than two minutes in his second pro fight to gain the attention of the MMA world. How? With one of the most gracefully executed flying knees ever seen in the sport. A year later, Pace went on on to compete in the WEC against current UFC Bantamweight Champion Demetrious Johnson and join the UFC shortly after as well.

Chris Beal isn’t just one of UFC’s brightest bantamweights; he’s also one of the most inspirational people in the world. Back in 2009, 23-year-old Chris Beal was diagnosed with a rare form of cancer known as fibrosarcoma, in his knee. After almost two agonizing years of battling with the cancer, Beal was pronounced cancer-free and resumed his career in 2011.

Beal went on to win his next six fights before joining the UFC. And when he made his UFC debut at UFC 172, he shook the world with one of the best-ever flying knee knockouts the sport has ever seen.

26-year-old Bellator featherweight Tywan “Air” Claxton made his professional mixed martial arts debut in November of 2017, and he couldn’t have made a better first impression.

Just a little over a minute into the first round against John Wayne, Claxton drove his knee into his opponent’s face at the center of the cage and instantly ended the fight. Claxton’s knee connected right on the bridge of Wayne’s nose and the impact turned the lights out with no need for follow-up ground-and-pound.

Even more impressive is just how much air Claxton got in his upward explosion. He’s a tremendous fighter with freakish athleticism. It’s resulted in four knockouts in his career thus far out of five victories.

Although Claxton recently suffered his first career loss earlier this month, there is no doubt he will bounce back. He’s definitely one guy to watch out for.

In his prime, “The Prodigy” BJ Penn was an absolute beast. He was one of the most feared men inside the Octagon and for very good reason. The former UFC lightweight champion had a mean streak about him, and it always translated into some epic performances inside the cage.

At UFC 84 in May of 2008, Penn took on fellow former champion Sean Sherk. At the time, Penn had just come off winning the lightweight belt from Joe Stevenson and was making his first title defense against “The Muscle Shark”.

It was a great scrap from start to finish, but just before the round ended, Penn landed a thudding knee right on the button as he was chasing Sherk across the Octagon. Penn followed up the destruction with a few more fistic bombs for good measure.

Though Sherk was able to hear the final bell, he could not answer the call for round four and Penn had his first successful title defense.

Thiago Alves is a legend in his own right, and when he took on equal legend Matt Hughes in June 2008, it was instant fireworks. Coming into the bout with a hot five-fight win streak, Alves was given a shot against former UFC welterweight champion Matt Hughes.

Hughes was coming off a bad skid wherein he dropped two of his last three bouts to Georges St. Pierre. At the time, Hughes was looking to use his world-class wrestling pedigree to earn a much-needed victory against Alves. Things wouldn’t go according to plan.

Alves detonated a monstrous flying knee on Hughes just one minute into the second round. What made matters worse was the Hughes was trying to duck under, which no doubt amplified the damage.

The win would later go down in history as one of the most exciting knockouts in Thiago Alves’ career. It will, for sure, live on in his highlight reel for many years to come.

Once a two-division ONE World Champion, Martin “The Situ-Asian” Nguyen went back to his natural weight class to defend his ONE Featherweight World Title against veteran and former champion Narantungalag Jadambaa.

Even at the age of 43, Jadambaa was a force to be reckoned with. Jadambaa was riding a two-bout win streak heading into the matchup and looked as good as he’d ever been. For Nguyen, this was a legend he couldn’t wait to face.

But Nguyen had begun training with Aung La N Sang at Henri Hooft’s Hardknocks 365 gym in Florida for this bout. The change in team resulted in unlocking Nguyen’s full potential.

He looked absolutely phenomenal in dismantling Jadambaa, tagging him with a plethora of shots including his vaunted overhand right. Just past the one minute mark in round two and Nguyen had Jadambaa pressed up against the cage fence. That’s when he let loose the flying knee that ended the fight.

So tell us, which flying knee knockout on this list is your favorite? 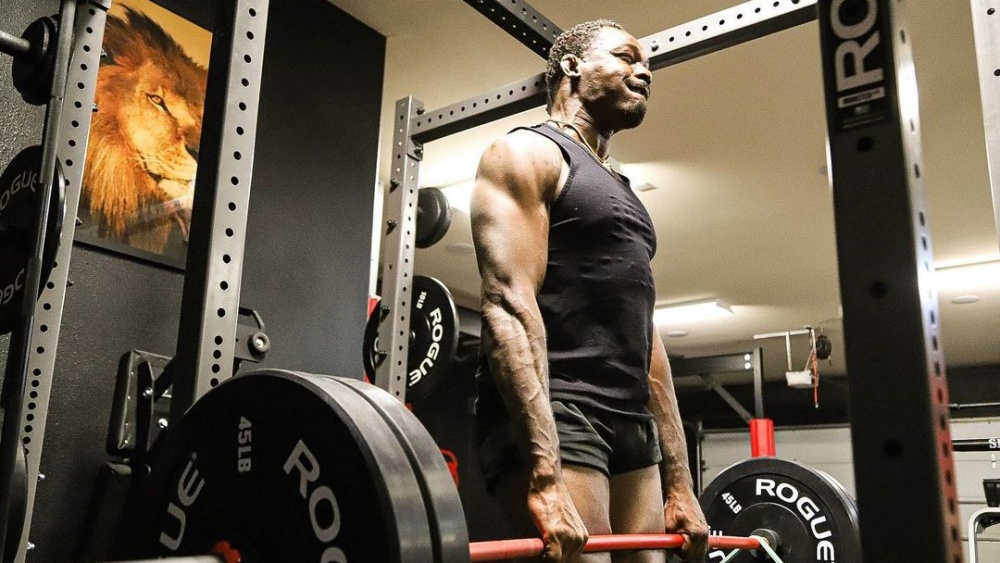