WATCH: Knock Your Opponent Out With These Explosive Superman Punch Combinations (Videos) 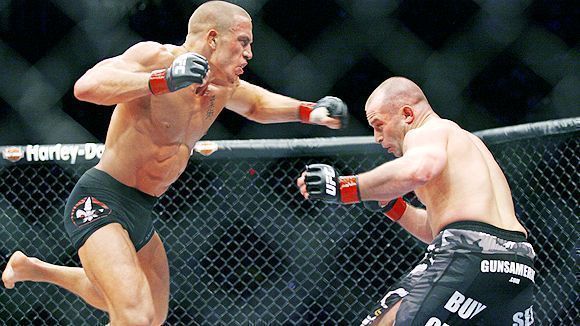 If you’ve been training Muay Thai or watching MMA fights, you’d have probably chanced upon the superman punch at some point. Known to be a surprising strike with game changing potential, the superman punch uses momentum to generate monster KO power. When landed with perfect timing, technique and accuracy, it can be a rather exciting finish.

Want to learn more about this flashy move? Then you’re in luck. Today, Evolve Daily shares Explosive Superman Punch Combinations That Can Knock Your Opponent Out:

If you wish to execute a superman punch, you have to set it up very well. This is because it leaves you open and as a result, puts you at risk of getting countered by a well timed hook. However, this shouldn’t scare you into not utilizing this punch altogether! With the right setup and good timing, you could use this move to break your opponent’s rhythm and potentially knock him/her out.

In this video, multiple-time Muay Thai World Champion Petchboonchu FA Group demonstrates 5 basic superman punch KO combinations. If you watch closely, you’ll notice that Petchboonchu extends his back leg at the same time as he extends his rear hand for the punch. By doing so, he counterbalances his weight while generating more power at the same time.

These combinations are a great start if you intend to nail down the superman punch. Of course, it would help to drill with a partner, so as to gain a better understanding of distance and timing, before you actually try it when sparring or in the ring.

Tip: Once you’re familiar with these combinations, you can mix things up by including fakes in your combinations. One good way to set up the superman punch is by throwing a fake kick before swiftly executing the punch.

Now that you’ve seen the basic superman punch combinations, watch how it can be applied in the ring with this fight breakdown video. When you’re fighting in the ring, anything can happen. Therefore it’s crucial for you to stay focused and adjust to the situation accordingly – like what happened in the video.

In this fight breakdown video, you’ll watch and learn how Denner Sitbandon managed to alter the superman punch based on his situation in the ring and score a KO. Although he threw a modified superman punch, this is a great example of how you can very quickly transit from a shin block to a superman punch – even without returning your rear foot to the ground. Of course, it takes a great deal of technical knowledge and perfect timing to execute a move like this, so you have to keep drilling until you get it right, before you even think about utilizing it!

Tip: Always be on the lookout for openings. If you watch the video closely, Denner Sitbandon was able to knock his opponent due to his lightning reaction time and swift transition. Want to work on your reflexes? Then read our article on developing your reaction time for martial arts and take your training to the next level.

There’s no doubt that the superman punch is a good weapon to add to your arsenal. So go forth and train hard. You got this!