What Is The Toreando Pass In BJJ Brazilian Jiu-Jitsu is a grappling martial art that focuses on 4 basic tenets: taking the opponent down, passing the legs, using a variety of pins, and securing the submission. One of the main focuses in training in BJJ is developing a solid guard. This focus on guard work is what separates BJJ from its contemporaries like Judo and Sambo.

The guard is a crucial part of BJJ as it serves as both a defensive barrier and an entry to various attacks. Many famous athletes have relied on their guards to win championships. In order to be successful in the sport, one must be able to not only develop a strong guard, but to pass guards as well.

In this article, we will talk about the toreando pass, an excellent guard pass that mimics the movement of agile matadors.

There are two styles of guard passing in BJJ: speed-based and pressure-based passes. Speed-based passes rely on quickly misdirecting the opponent’s energy, with the intent to blow past the guard by using angles and explosiveness.

On the other hand, pressure-based passes focus on pinning the hips and neutralizing the legs of the opponent. The logic here is to misalign the body to exploit weak areas for passing. Pressure passing relies on the use of weight to slowly move up past the legs, eventually pinning the head.

Both passing styles are undoubtedly effective. It is good to use the style that suits your frame and personality. Pressure passes favor the bigger and heavier grapplers, whereas speed passes favor the smaller and more agile ones.

While it is understandable that most grapplers would prefer using techniques that suit their bodies, it is also helpful to explore other styles to understand the nuances of other available techniques. This will help you build a solid understanding of their strength and weakness – this will come in handy when you have to defend against these techniques in sparring.

The Toreando Pass In BJJ

The toreando is a speed-based pass in BJJ. It is named toreando, also known as the bullfighter pass, as it mimics the movement of a matador misdirecting a bull. The basic premise of the toreando pass is to control the opponent’s legs as you move your body to the opposite.

Although its initial entry is speed-based (since you have to get past the opponent’s legs), you can switch to a more pressure-based approach as you fight to control the hips, arms, and head. This pressure-based finish is effective to get into and maintain a dominant position as you attempt to pin your opponent in side control or mount.

The toreando pass came into favor when grapplers started to use standing passes to open the closed guard in the 1990s. After opening the closed guard, grabbing the legs of the opponent became a reasonable option from there. Since the starting position of the toreando pass is to hold the opponent’s pants or leg, it became a natural option for many grapplers during that time.

It was first highlighted during the match of Roberto Magalhaes against Fabio Gurgel in 1996. Roberto was known for his whimsical open guard game. His style was unpredictable, and his flexible guard work was notoriously difficult to crack. Fabio Gurgel was able to neutralize Roberto’s guard with the toreando guard pass. He was able to pass one of the most defensive guards in BJJ at that time.

There are 5 main toreando guard pass variations, according to Stephan Kesting. He mentioned that this is the result of the constant evolution of the toreando. The 5 variations can be effective for Gi and No-gi BJJ and MMA. These variations can be done with or without the pants.

The old school toreando pass is where you control the opponent’s ankles and use misdirection by throwing their legs towards a side. The typical finish of this pass is to land on the knee on belly position.

This variation of toreando pass is what grapplers usually drill in their warm-ups. While this variation can work in BJJ and MMA, it is not as effective in high-level BJJ (especially at the world championship level), where most grapplers are skilled in guard retention. This variation of toreando starts by gripping below the opponent’s knees instead of the ankles. Push the opponent forward to gather momentum and move your feet and hips backward when the opponent pushes away. Drag the feet to the floor, circle to the side, and drop your shoulder to the opponent’s belly (similar to the throw by pass) while staying up on your toes.

From there, you can switch your grips to the head and secure the side control. The problem with this variation lies with the initial step; your opponent can wrestle up once you force their legs to the floor. Alternatively, they can enter the spider or lasso guard due to the grips on the knees.

The push and pull toreando is applied by first grabbing the knee with inside grips or near the opponent’s shins. Both are viable for as long as you can use it to push their hips to the side while the other hand pushes the leg down. Forcing the opponent’s far leg on one side causes his hips and body to turn in that direction. It exposes the back when this happens. 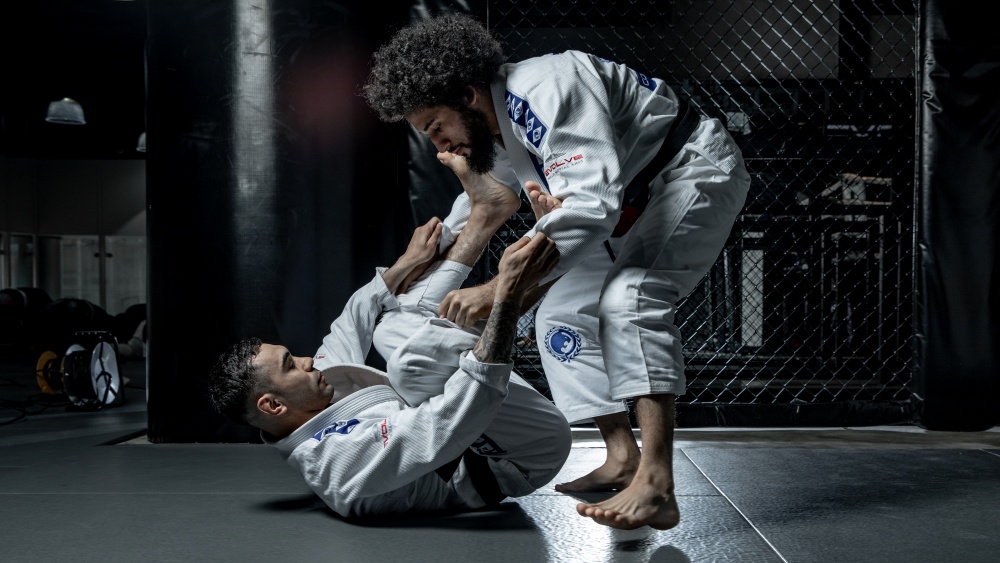 This fourth variation is similar to the third and is best applied when the opponent balls up. The opponent may start to use grips and enter into an open guard variation such as the lasso and spider. When this happens, control the knees and perform a steering wheel motion. This puts you into the north south position. Continue by dropping your head into the opponent’s belly to deny their frames.

5) Toreando With One Hand On Hip

This last variation is performed by first doing a double v-grip on the opponent’s shins as opposed to grabbing the knees. Next, move one grip to the hip. Doing so allows you to circle to the side before crashing in to get side control. As you move to the side, make sure to maintain the hip and shin grip to prevent the opponent from going back to guard.

Any successful pass in BJJ requires good use of technique, timing, and pressure. The great thing about the toreando pass is that it has been battle-tested for many decades and is very easy to do. Try these variations with a partner and drill the entries, what-ifs, and finishes with proper technique. Good luck and let us know how it goes!