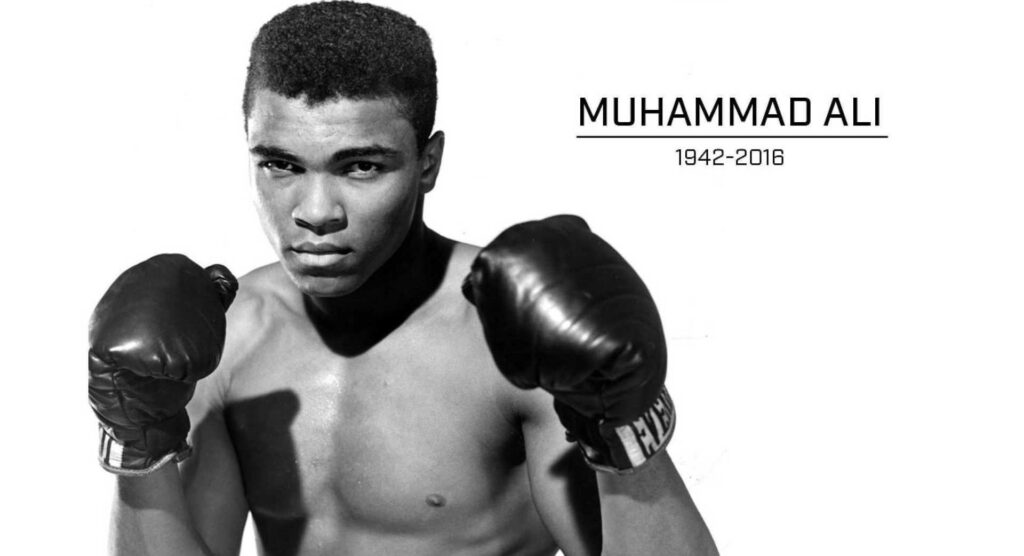 The name Muhammad Ali has long been synonymous with professional boxing. Considered as one of the true legends of the sport, he remains to be one of the greatest heavyweights in history.

Muhammad Ali, formerly Cassius Clay, is not only known for his prowess in the ring but also his ability to stir controversy. He is regarded as a figurehead in the fight for racial equality and religious freedom, as well as his anti-Vietnam war views and evasion from conscription. He is also known as a spokesperson for Parkinson’s disease.

“I am the greatest, I said that even before I knew I was.”

When you are confident in your abilities, it will shine through in everything you do. You should always know that you have the power to do whatever you set your mind to. The minute you start doubting yourself is when you start going down the path to failure.

Growing up, we are raised with a set of beliefs and values that we must follow. We tend to only associate with people who are raised the same way. If we don’t open ourselves up to new ideas and experiences, we may never grow—spiritually, mentally and emotionally. We will continue to live in our world of prejudices and biases, not knowing any better. Don’t be afraid to be more open-minded. The more you learn, the bigger the world will seem.

Muhammad Ali’s distinctive boxing style was first seen by the world in the 1960 Olympics in Rome. Despite his size, Muhammad Ali zoomed and weaved around his opponent like a lightweight. He stuck to this style throughout his career and became the reigning champion for many years.

When you find a particular style that suits you, don’t worry about what other people think. If they think it’s too different and unique, stick to your guns and prove to others that it is just as effective, if not better.

“He who is not courageous enough to take risks will accomplish nothing in life.”

It is natural to fear failure. After all, failure means that you were not able to accomplish what you have set out to do. If we continue to accept our fear of failure, we won’t be able to achieve anything great in our lives. Instead of living a life of regret and doubt, why not take risks on the chance that you might achieve something amazing? If you are persistent enough, these risks can lead to great rewards in the future.

“I know where I’m going and I know the truth, and I don’t have to be what you want me to be. I’m free to be what I want.”

Staying true to who you are requires courage and great self-awareness. It means that you are honest with yourself and others about your feelings, what you value and desire. You shouldn’t try to be someone you’re not just to be accepted by others—in the end, this will leave you unhappy and confused. “Don’t quit. Suffer now and live the rest of your life as a champion.”

In training, we go through many different emotions. Pain, suffering, anger and disappointment; these feelings can disrupt the training process and often make us want to give up. Instead of raising our white flags, we should turn these emotions into fuel for training. We should work as hard as we can and refuse to let our feelings get the best of us. After all, by giving up, we will never know what it means to become a champion.

“The man who has no imagination has no wings.”

As children, we were encouraged to use our imagination as often as we could. Unfortunately, as we get older and increasingly boxed into corporate atmospheres, we become less likely to use our creative abilities. We should take advantage of any chance that we get to harness our imagination. By being creative, we are opening ourselves up to new ideas and opportunities that could lead us to success in the future.

“Service to others is the rent you pay for your room here on Earth.”

Giving back to the community and making a difference in someone’s life is one of the greatest feelings in the world. Not only does it benefit the recipients, but it also boosts your self-esteem and physical health. It is also a way of giving back to the community you live in. Through community service, you are simply returning the favor to those who have helped you become the person you are today, even if indirectly.

“It isn’t the mountains ahead to climb that wear you out; it’s the pebble in your shoe.”

Muhammad Ali faced many obstacles in his life—from being conscripted into the Vietnam War to fighting for racial equality in the 60’s. At the same time, he was determined to remain “the greatest” boxer there ever was. Instead of letting these issues get to him, he remained focused on his dream. In life, we will always be susceptible to obstacles that prevent us from achieving our goals. It is how we deal with these obstacles that determine whether we have the capability to become champions or not.

“Only a man who knows what it is like to be defeated can reach down to the bottom of his soul and come up with the extra ounce of power it takes to win when the match is even.”

The most successful athletes all have one thing in common: mental toughness. It is what pushes you to work harder when you are ready to give up, and what tells you that you can do anything even when you are on the verge of losing. Mental toughness is a result of many different situations, especially defeat. By learning how to deal with these situations, rest assured, you will be ready for anything.

Muhammad Ali has become known not only as one of the best athletes of all time, but also as an iconic figure in pop culture. His sage advice continues to inspire us, giving us hope that we too, can become “the greatest” if we try. 5 Problems Every Martial Artists Face And How To Overcome Them

The path toward mastery in the martial arts is not an easy mountain to climb. It is a road filled with external and internal challenges, and all practitioners are expected to face and overcome them… The Importance Of Encouraging Your Training Mates In The Gym

Martial arts training is a group activity that gives you many opportunities to make new friends and expand your social network. Your training partners also help to keep you motivated to train. They are there… Image via ONE Championship
Life Friday

Competing is a huge part of martial arts. It gives you a chance to compete against different martial artists from different schools who might have a different approach to how your gym does things. It…