Atop the ring, they put together spectacular performances, inspiring displays of courage, heart, and supreme skill. Boxing at its highest levels isn’t easy, and it takes a special sort of individual to be able to climb into the ring with another man and throw down.

Fighters spend hours upon hours in the boxing gym, honing their skills and pouring their souls into training just to develop themselves. Competition is fierce, and focusing on all areas of the game is crucial to success.

But the physical training isn’t the only important aspect of an elite boxer’s training program. Nutrition also plays a major role in a boxer’s success.

In fact, nutrition is what ensures boxers are maximizing their gains and getting the most out of every session. It also aids in the recovery and rehabilitation process when the boxing gym doors close.

Have you ever wondered what high-level boxers eat during training camp, which allows them to grow stronger every day while maintaining their weight? Let’s shatter some of the mystique surrounding what boxers eat when they are in camp.

Filipino ring icon and boxing’s only eight-division World Champion Manny “Pacman” Pacquiao is known for his fiery left hand and thudding right hook. He has obliterated his opponents over the past two decades with his superior speed and quickness, and unrelenting offensive attack.

Many fans stand in awe of Pacquiao’s unbelievable stamina, and the way he is able to sustain throwing many combinations each and every round. In order to maintain his unique style, however, Pacquiao requires a lot of fuel in the tank. That’s where nutrition comes into play.

Pacquiao burns up to 7,000 calories a day during training, and as such he consumes just as much across six meals on a daily basis. His first meal comes at 3am when he downs his first protein shake. Throughout the day, the Filipino consumes his favorite dishes like Tinolang Manok (Filipino-style chicken soup), and beef Tapa, a traditional Filipino dish made from strips of steak marinated in soy sauce and garlic.

The legendary Floyd “Money” Mayweather Jr. is known for his incredible defensive style which has brought him success throughout the years and an unblemished 50-0 professional record. He stifles his opponents in the ring with his craftiness, using his speed, cunning, and reflexes to nullify any foe’s offense.

Mayweather loves to conserve his energy and makes good fuel-efficient strategies heading into his bouts. But in order to operate the way he does at such a high level, Mayweather pushes himself to stay in tip-top shape.

As rich as he is though, Mayweather, of course, has a personal chef preparing all of his meals. Mayweather opts to consume fibrous fruits and vegetables in every sitting. His diet is very similar to that of a paleo or low glycemic diet which eliminates processed foods and hidden sugars.

However, Mayweather does love to cheat every once and a while and have his favorite food — fried hotdogs.

Gennady Golovkin, also known as GGG, is widely considered the modern day baddest man on the planet. He has an iron chin, and fists made of steel which have felled many opponents at the highest level.

Golovkin loves to maintain a devilish pace during training and works out like an absolute machine in order to build himself up for his coming bouts. Ask anyone who has worked with him or has seen him in training, and they will tell you he has no quit in him and just keeps putting in the time and effort every day without fail. Golovkin’s work ethic is second to none.

To supplement hard training, Golovkin consumes lots of water throughout the day. He has oatmeal, eggs, and juice (multiple varieties) in the morning for breakfast. He typically has a smoothie after workouts, with no supplements or powders. Just good old fashioned fresh food. At lunch, his favorite go-to meals include grilled chicken, potatoes, and a salad with ranch dressing. At dinner Golovkin loves to eat steak and mixed vegetables. He typically eats until he is full.

Canelo Alvarez is the modern day Mexican boxing warrior. At just 29 years of age, he has certainly built up quite the reputation. If he isn’t number one pound-for-pound on your hypothetical list, Canelo is surely in your top five.

The way he carries his speed, power, and athleticism is unmatched. His unique explosiveness has led to a myriad of exciting knockout finishes throughout his career. What’s even more unmistakable with Canelo’s style is his undeniable Mexican warrior heart. He just keeps coming forward, applying pressure on his opponents who usually crumble under the intense heat.

During training, Canelo likes to stay away from carbohydrates for the most part. He is only allowed to eat bread or rice just once a week and he consumes a lot of protein like fish, chicken, and steak. Snacks consist only of fruits and vegetables. Truth be told, there isn’t much variety in Canelo’s fight camp diet, just a lot of repetition. It’s a sacrifice he makes to stay in shape. 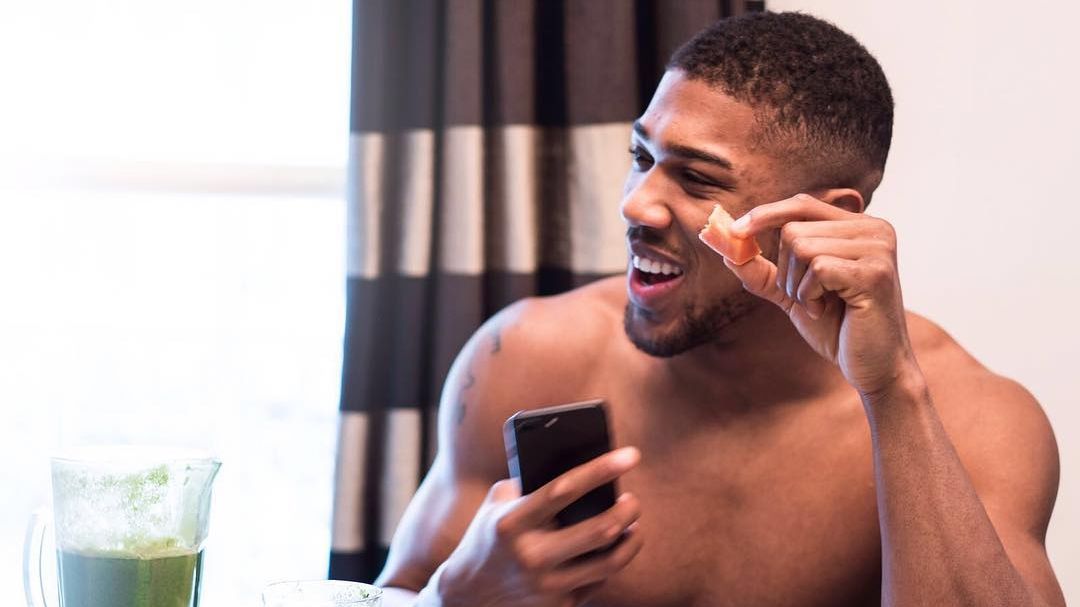 Martial artists have to maintain a strict diet, especially when competition is approaching.

English boxing superstar Anthony Joshua is one of the fastest rising stars in the sport of boxing. One look at the colossal heavyweight and you can see that he’s built like a truck and incredibly strong.

But as big as he is, it’s not to say that Joshua simply eats what he wants, whenever he wants. The 30-year-old adheres to a strict diet too.

In the mornings, Joshua likes to start his day with a tall glass of water. This kickstarts the metabolism and prepares his digestive system to better process the food that later serves as fuel for his workouts. After downing the water, Joshua consumes a healthy portion of fruit accompanied by a bowl of porridge or oatmeal.

During lunchtime, Joshua goes with lean meats and fish like salmon, paired with a lot of vegetables. Salmon provides enough protein for a man as big as Joshua. At dinner time, Joshua loves the home cooking prepared for by his own mom, which consists of Nigerian dishes like pounded yam, eba, and egusi.

On cheat days, he eats chocolate with no sugar and only natural honey.

Top 10 Foods To Fuel Your Performance