Brazilian Jiu-Jitsu is a rapidly growing martial art where techniques and gameplans change over time. Over the past few decades, many champions have pioneered approaches that transformed how the game is played.

In order to stay competitive in today’s landscape, it is an absolute must to have unique tools in order to have a head up on your competition, whether it be sweeps, submissions, or sequences. Today, we’ll discuss compression locks, a seemingly underappreciated subset of submissions guaranteed to catch unaware training partners.

What Are Compression Locks?

Compression locks are submissions that aim to compress muscle against the bone. They are techniques that can cause immense pain and, at the same time, damage muscles and tendons if left unchecked. Compared to the typical submissions you see in BJJ, where we leverage weak points of the human skeleton and strangle the neck, compression locks are primarily meant to target the tendons and muscles of the limbs.

The funny thing with compression locks is that it is not treated with the same level of regard as joint locks and strangles. For whatever reason, many old-school practitioners think of compression locks as a cheap way to get the tap – similar to how the heel hook was treated before the rise of the modern leg lock game.

As we discussed in our introduction, the sport of Jiu-Jitsu is always evolving. It is, therefore, a smart idea to learn compression locks as they are very effective against most opponents.

Compression locks are mostly practiced in no-gi Jiu-Jitsu or submission grappling. Submission grappling rulesets are more lenient than gi-based tournaments, and you have the freedom to be as creative as you’d like. Eddie Bravo’s popular 10th Planet Jiu-Jitsu team is a big proponent of compression locks and is perhaps one of the top affiliations that use these techniques.

Now that we understand the basics, let’s explore some common examples of compression locks.

In this video, BJJ black belts Eli Knight and Jared Jessup demonstrate a couple of high-percentage compression locks you can add to your game.

The first technique in the video is the bicep slicer from the armlock position. You can execute this compression lock if your opponent is stubborn with their armlock defense. Place the narrow part of your forearm near the opponent’s wrist and stack your legs over their grip. Loop your leg over the arm and form a triangle configuration with your legs as you remove the slack. Use the blade of your wrist to inflict maximum damage.

The following submission is the ham sandwich from the knee on belly position. This is a unique submission and can submit even your most experienced training partners. Step back and shoot your arm through the opponent’s leg from the knee on belly position. Sit on your opponent’s foot as you grab your own shin, cross your feet and use your blade against the back of their knee.

The next one is the bicep slicer from bottom side control. This is an unorthodox technique that’s safe to use and has a lot of firepower. If your opponent chooses to drape their arms on your leg (to attack toeholds), you can proceed with this submission. Drop your knee slightly to give space to your arm as you shoot through. Cup behind the tricep and triangle your legs as you extend. The pressure from this submission is immense and will surely turn many heads in the gym.

Another sneaky technique they show is the bicep slicer from the triangle defense position. This is a good technique if your opponent leaves space by keeping their arm near the centerline. Loop your arms near the bicep and triangle your legs to attack the bicep.

It’s up to you how you prefer to triangle your legs; this will help prevent the guard pass and force your opponent to stay on the defensive for as long as the lock is set in place. 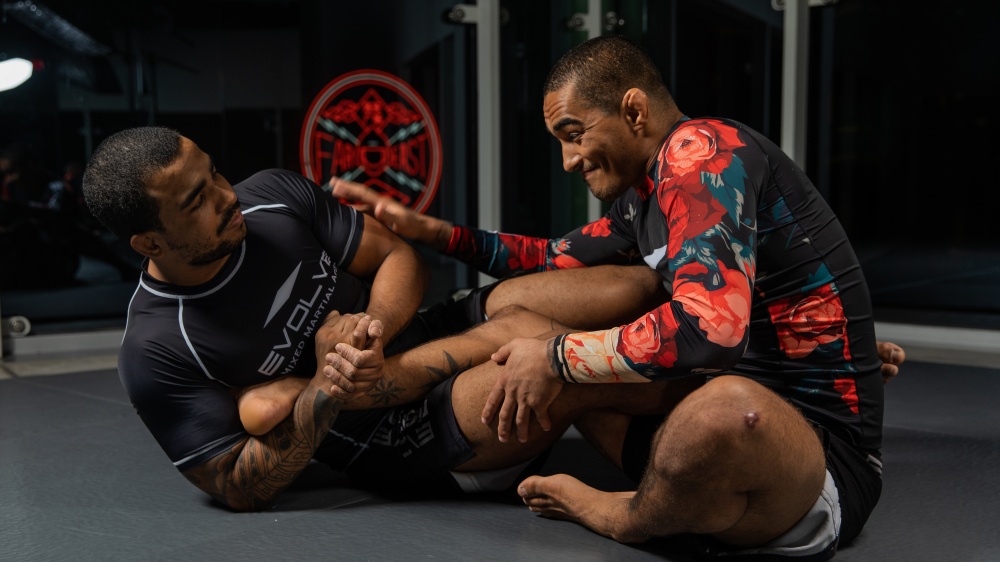 The key to these submissions is fully committing to the techniques once applied in live sparring, especially in competitions. Many will most likely tap from just a little pain, but the higher you go up in rank, the harder it is to catch more experienced practitioners.

Always remind them that an undefended compression lock may cause damage to their limbs, and it should always be treated with the utmost urgency. It is a good idea to talk to your training partners when training these types of submissions so that you are all on the same page regarding expectations.

Compression locks are indeed excellent options to add to your repertoire of techniques. They don’t require much strength and are good follow-up techniques to more traditional submissions like armbars and leg locks. Make sure you sprinkle these submissions on your strongest positions so that you can add them to your rotation of attacks. An effective attacking chain should always consist of passing and submission attempts. The more unpredictable you are in this regard, the harder it is for your opponent to deal with your offense.

If you’d like to learn these types of submissions, we suggest you first talk with your coach to see if you can use them in the training room. It is best to be clear on what’s allowed in training as mat rules vary from gym to gym.

We recommend that you learn at least 2-3 compression locks in the beginning stages of your BJJ journey (assuming they are allowed in training, of course). Please focus on using pure technique and never force the submission to minimize the potential of injuries. Have fun, and let us know if they work for you.