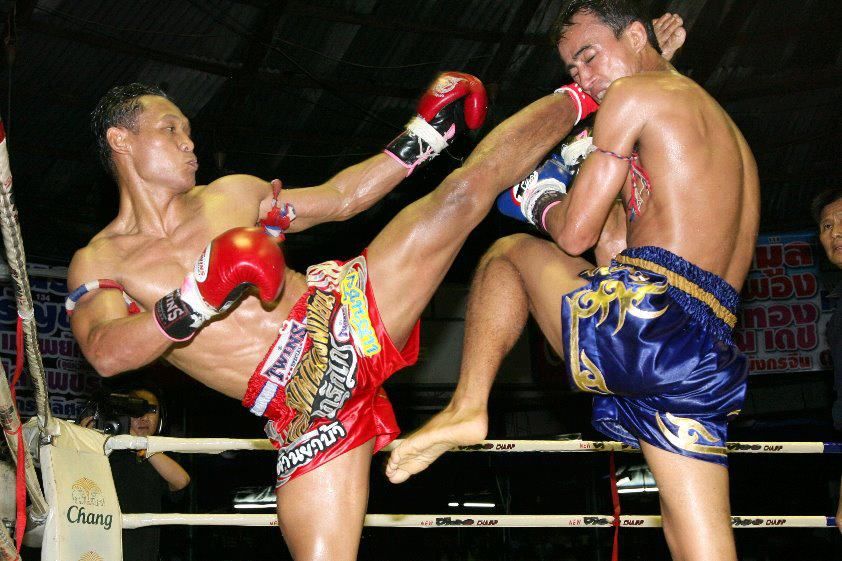 Saenchai PKSaenchaiMuayThaiGym (formerly Saenchai Sor. Kingstar) has been fighting since he was just 8 years old and has reigned at the top of the Muay Thai world for more than a decade. His legacy lies not just in the unique, unorthodox style he brings to the ring, but also by the performances he has had throughout his career against some of the greatest fighters from Thailand and around the world.

Knowing that he would only be fighting for three rounds, Petchboonchu came out uncharacteristically aggressive, locking Saenchai in the clinch once the bell rung and kneeing him relentlessly. However, Saenchai stayed calm in the clinch order to conserve his stamina, which allowed him to spot openings and break Petchboonchu’s balance several times.

During the fourth and fifth round, Sagetdao adopted a similar strategy to Petchboonchu’s, with the intention to break Saenchai down in the later rounds. However, Saenchai was more effective in keeping the distance with Sagetdao, using well-timed teeps and mid kicks. From there, he was able to land the more significant strikes against the incredibly technical Sagetdao.

It’s hard to imagine anyone beating Petchboonchu or Sagetdao individually let alone both of them together in one fight, but Saenchai was able to get the unanimous decision victory after five grueling rounds with the two legends. This is undoubtedly the greatest and most impressive fight of Saenchai’s illustrious career. In fact, it might even be the single most incredible feat any fighter has ever achieved in the world of martial arts.

This fight took place back in 2012, and pitted rising star Pakorn Sakyothin against the much older and experienced legend, Saenchai. This was Saenchai at his very best – fast, elusive and tricky. And the fact that Saenchai was able to do all he did against a younger Lumpinee, Rajadamnern and Thailand Champion in his prime just makes him even more impressive.

Saenchai’s dominance right from the start was surprising for many fans, as many of them believed that the younger Pakorn would be able to push Saenchai to his limit. However, Saenchai was just too tricky for Pakorn, frustrating him with perfect teeps throughout the fight and even landing a couple of beautiful cartwheel kicks with ease.

In the end, Saenchai took home the unanimous decision win in one of the best performances of his career even at the age of 32. Not long after, Pakorn left Sakyothin gym to join with Saenchai at his newly established PKSaenchaiMuayThaiGym. Saenchai would go on to beat Lumpinee Muay Thai World Champion Damien Alamos and multiple-time kickboxing and Muay Thai World Champion Liam Harrison for a title all within a month after the fight.

At 25-years old, Saenchai was already one of the most exciting fighters to watch in Thailand. His unique style made him a household name and gained him fights against very formidable opponents in heavier weight classes. One particular fighter had developed quite a rivalry with the young Saenchai: Khem Sor Ploenchit (currently Kem Sitsongpeenong).

Before this fight, Saenchai and Khem had fought two times before with each fighter having a win over the other. The rubber match was finally set to take place for the star-studded One Songchai Tsunami Show back in 2005. The fight was drastically different from the first two, with Saenchai looking more confident and flashy than ever before, determined to outsmart the much taller Khem.

Throughout the fight, Saenchai was able to avoid many of Khem’s attacks and land many of his innovative combinations, jumping elbow strikes, explosive push kicks, and even throws in the clinch. Backed against the ropes in the fourth round, Saenchai executed a sweep with so much speed and force that Khem was unable to recover from the impact of the fall. To this day, this knockout remains one of the greatest in Muay Thai history.

Saenchai has made quite the career out of fighting larger opponents, especially when it comes to fighting non-Thai fighters. The living legend has been known to give up about 5 lbs to find worthy opponents in Thailand and over 15 lbs against foreigners. This shows the huge difference in skill Saenchai has over foreign fighters as he still manages to dominate these bigger opponents, even toying with them at times.

His first fight with renowned French kickboxing and Muay Thai World Champion Fabio Pinca is a perfect example of this. This was one of the first few times Saenchai squared off against foreign competition on the world stage. And against an elite fighter like Pinca, he sure proved just how much more superior his Muay Thai was.

Saenchai’s elusive style was able to frustrate his French opponent throughout the fight, forcing Pinca to resort to the clinch in an attempt to utilize his size advantage. However, Saenchai’s experience and skill was just too much to handle as he showed superb balance in the clinch and managed to throw Pinca off balance at will.

Saenchai and Kongsak Sitboonmee’s four-fight rivalry was only ever possible because of their first meeting back in 2011. The two Lumpinee title holders and Sports Writers of Thailand Fighter of the Year award recipients had such a heavily contested bout that things started to get personal within the fight itself.

Constantly trying to outmatch one another in technique, Saenchai and Kongsak brought out the best in one another. However, Saenchai’s best was just too much for Kongsak, who was outpointed with counters and sweeps. And of the four times that they have fought, Konsak never managed to beat Saenchai.

These are just a few of the many great fights Saenchai has had throughout his career. They are truly a testament to the greatness and legend that is Saenchai. Don’t miss your chance to meet and learn from the living legend himself at his seminar held on the 26th and 27th of September at Evolve MMA!

To reserve your spot for the seminar, click here. Fast, graceful footwork is one of the fundamentals of Muay Thai classes. Great footwork allows you to slide out of attacks, and it can place you in optimal positions and angles to land strikes of…