Practicing martial arts is undeniably beneficial to one’s health, as exemplified by its many long-living and physically fit exponents. Founders of Brazilian Jiu-Jitsu Carlos and Helio Gracie both almost made it to 100, while famous kung fu masters like Wang Ziping and Du Xinwu enjoyed good health well into their 80s, thanks to the good exercise, habits, and diet that martial arts lifestyles comprise of. Today, medical research is able to thoroughly explain how and why martial arts training is a boon to its pugilists’ health.

Martial arts involves regular exercise – both the practicing of techniques and also workouts that help maintain performance levels at an optimum – as well as good posture and mobility that improve organ function. As practicing its various disciplines spikes metabolic function, martial arts is a bulwark against diabetes. These spikes of the martial artist’s metabolism also help maintain a healthy heart and improve one’s circulatory system, by training the heart muscles and circulatory muscles, as well as retaining the elasticity of blood vessels and mitigating potential blockages. Regular and necessary activation of essential organs, like the liver and kidney, also help maintain their function while removing toxins that might have built up, as well as older cells that can then be replaced by new ones. Lung capacity and endurance is simultaneously heightened by many martial arts’ requirement to maintain steady breathing and fine form during critical scenarios and intense flurries.

“The physical benefits of martial arts are enormous,” shares Dr. Eve Anwar, a doctor with the OneCare Medical Group. “It’s an engaging and ever-changing challenge to one’s stamina, endurance, and strength. Martial arts training builds strong muscles to support bone structure and provides an excellent cardio workout that has long-term benefits in heart health, including the prevention of high blood pressure, high cholesterol, and diabetic conditions as well as weight management.”

Martial arts not only raised the confidence of once pint-sized child and later two-time No-Gi Brazilian Jiu-Jitsu World Champion Bruno Pucci, but also helped him gain normal metabolism and body functions. He discloses, “When I was a kid, I suffered from growth hormone deficiency. Because of this, my doctor advised that I pick up a sport as a hobby, this is how I came across Brazilian Jiu-Jitsu. As soon as I had my first class, I was hooked. Training every day really helped my body develop, and along with the medication I was taking, Brazilian Jiu-Jitsu helped me beat the disease and become healthy.”

The aforementioned spiking of one’s metabolism benefits an exponent even when he or she is resting, as it prompts the body to burn fat even during periods of low-level activity. Critical scenarios in martial arts that are very demanding of the human physiology and psyche also build up anaerobic respiration, which has many health benefits in the long run, including better energy levels and endurance throughout the day. Besides exercise, function, and form, martial arts is also based on the principles of self-discipline and moderation, which go a long way in forging positive eating and lifestyle habits that translate to a healthier and happier life.

Martial arts is not only beneficial for the overweight but also good for underweight individuals, which is vouched for by multiple-time Muay Thai World Champion Orono Wor Petchpun. “Before starting Muay Thai, I was very frail and weak,” he shares. “The owner of my first Muay Thai camp almost didn’t train me because he felt I was too skinny. Once I started Muay Thai, my body started to develop and it became stronger. My overall health also got much better.”

3) The Flu and Colds 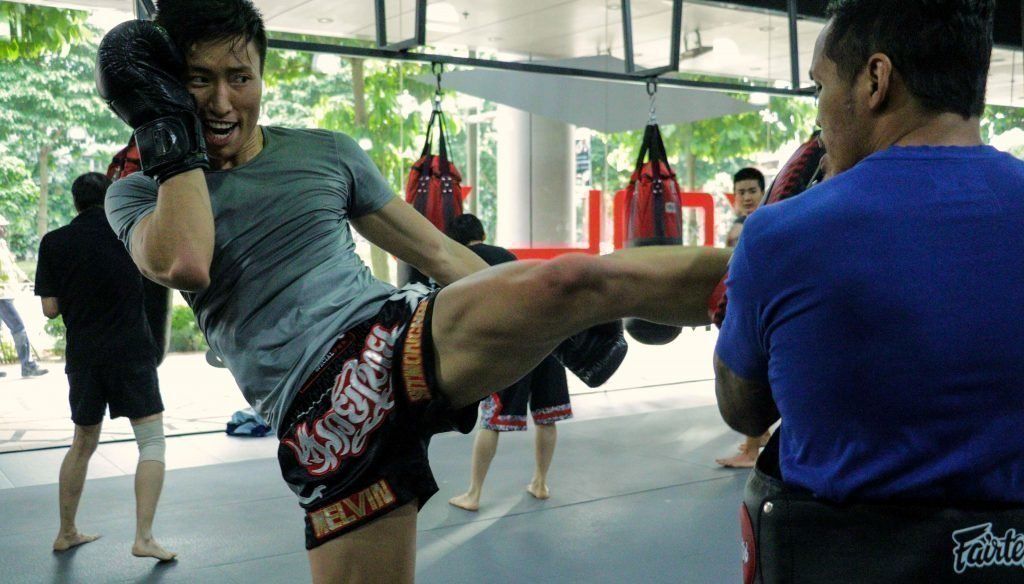 Training martial arts in the gym strengthens your immune system.

Optimum metabolic function and frequent exercise work wonders for the immune system. If you have been taking multivitamins but still find yourself susceptible to influenza and the common cold, consider exercise and martial arts, which stimulate the natural production of antibodies.

“Exercise has many benefits to health and wellbeing. Recent studies have shown that aerobic exercise reduces inflammation and resistance training leads to better brain function in response inhibition or self-discipline. The anti-inflammatory effects can significantly improve symptoms of fibromyalgia (chronic musculoskeletal pain and fatigue),” remarks emergency doctor Dr. Tan Ker Fern. “Aerobic exercise can reduce susceptibility to upper respiratory tract infections, but prolonged strenuous exercise like marathons can have a counterproductive effect. By exercising, the number and function of white cells in your blood circulation improves.”

As exercises that focus very much on functionality, martial arts is a proven countermeasure against discomfort in the bones and joints. Martial arts first emphasizes on mobility and inculcated good posture, followed by the imparting of a good range of motion. Strength in numerous major and minor muscles is gradually increased by martial arts training, as compared to other activities like running and lifting weights, which might unevenly focus on only major muscle groups. Many exponents get hooked on their training, and some even find it therapeutic – forms of catharsis that extend their health and wellness. Training all parts of the body also helps the practitioner’s body better communicate with his or her consciousness: the decreased function of any part of the body helps detect and prevent possible illnesses early.

“The psychological gains are no less astounding – the confidence boost from overcoming physical challenges, the camaraderie from coaches and fellow students, and the sense of well-being from a healthy body continue to feed the positive loop that keeps warriors on the quest to achieve greater heights in their martial arts journey,” divulges Dr. Anwar.”

So, if you’re looking for a way to keep healthy to prevent or overcome illnesses, martial arts is the perfect activity for you. Give it a go and sign up for a trial class today!