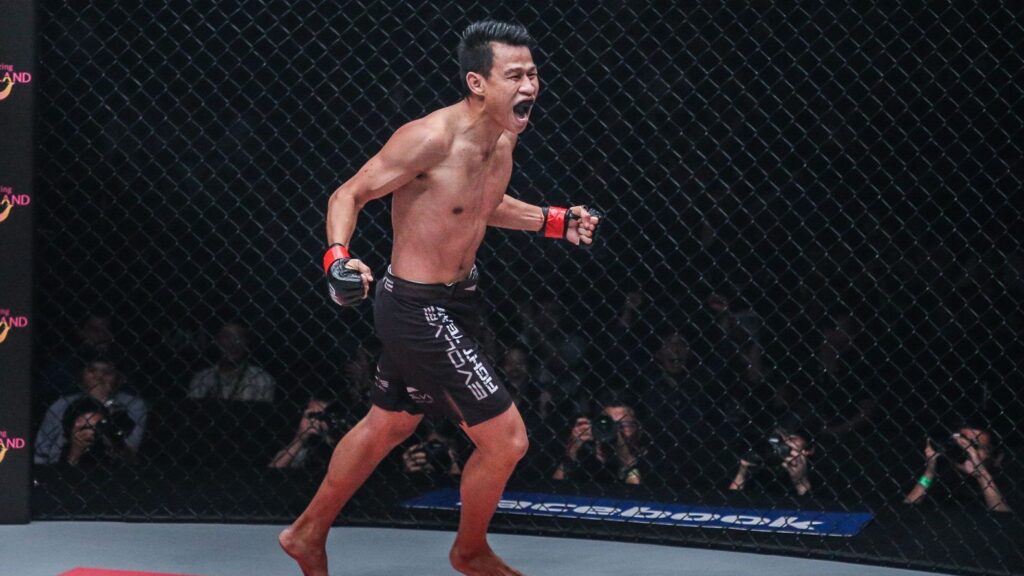 After conquering the world of Muay Thai, Muay Thai World Champion “Deadly Star” Sagetdao Petpayathai from the Evolve Fight Team transitioned to the mixed martial arts cage in March of 2017. And he hasn’t looked back, being named ONE Championship’s Breakthrough Star of 2017.

Since his ONE Championship debut, Sagetdao has strung together three scintillating victories, all ending by knockout in the first round. It should come as no surprise, however, as Sagetdao is considered by Thai media as one of the greatest fighters in history.

He is a legend by any standard, having won multiple Muay Thai world championships throughout his career, including prestigious Lumpinee, Rajadamnern, MAX Muay Thai, and WBC Muay Thai world titles, as well as having defeated the biggest names in the sport such as Saenchai PKSaenchaimuaythaigym, Petchboonchu FA Group, Singdam Kiatmookao, Nong-O Gaiyanghadao, Anuwat Kaewsamrit, Nongbee Kiatyongyuth, and many others.

Last year, however, Sagetdao made the decision to try and conquer a new arena, bringing his otherworldly talents to the ONE Championship cage. And by all accounts, the 31-year-old is looking absolutely powerful and mighty from what we’ve seen from him so far.

Sagetdao is scheduled to make his next appearance this Friday night, 29 June at ONE: Spirit of a Warrior, set for the Thuwunna Indoor Stadium in Yangon, Myanmar. He will face China’s “The Cannon” Ma Jia Wen in a three-round featherweight contest.

Before he steps back into the ONE Championship cage in search of his fourth straight victory, let’s take a quick look at what he has accomplished so far on the toughest proving ground of world-class MMA action.

Sagetdao’s mixed martial arts debut was met with a lot of anticipation because everyone knew what he was capable of in Muay Thai. There was a lot of expectation, and pretty much everyone knew his striking would transition well into the cage.

A huge question mark was placed on his grappling, however, given that he had come from a pure-striking background. Against Malaysia’s Kelvin Ong, Sagetdao was able to answer some of those questions.

Ong tried to get the underhooks on Sagetdao, but the Thai legend never gave him the chance to, stopping every shot with sprawls and returning fire each time Ong got too close.

Of course, training with the prestigious Evolve Fight Team, Sagetdao has access to World Champions in BJJ to help him with the development of his ground game. So it should come as no surprise that he was able to thwart many of Ong’s grappling advances.

To make matters worse for the Malaysian, Sagetdao’s powerful kicks were definitely on point for as long as the fight lasted.

Midway through the first round, Sagetdao caught Ong in his vaunted Muay Thai clinch and absolutely lit his foe up with elbows and punches until the referee called a halt to the contest. It was a tremendous performance by the Thai superstar and one that announced his arrival in the world of MMA.

2) The Destruction of Egypt’s Mahmoud Mohamed in Shanghai

Having answered some of the biggest questions surrounding his wrestling game, Sagetdao would return to the ONE Championship cage just months later, this time to further showcase the Muay Thai skills that made him such a sensation back home.

Competing for the first time in Shanghai, Sagetdao met Egypt’s Mahmoud Mohamed, a martial arts veteran who had competed against some big names in ONE Championship. Though it was supposed to serve as a good test for the Thai, Sagetdao turned the fight into a showcase of his amazing striking skills.

Once again, an opponent tried to take Sagetdao to the ground, but again, Sagetdao exhibited stellar defense in the clinch, using his position wisely in every exchange and controlling the action against the cage fence.

Mohamed said prior to the contest that he would submit Sagetdao with a rear naked choke, but it soon became clear just a minute into the fight that it wasn’t going to happen.

Instead, Sagetdao delivered another stunning performance in the clinch, smashing Mohamed with a sharp elbow midway into the first round that instantly crumpled the Egyptian. The Thai star followed that up with a series of even more elbows to complete the finish.

Multiple-time Muay Thai World Champion and ONE Superstar Sagetdao Petpayathai from the EVOLVE Fight Team put on a blistering performance to win by first round knockout at ONE: Warriors of the World!

Returning home to Thailand, Sagetdao would be met with a throng of raucous fans at Bangkok’s famous Impact Arena. This time, he would take on dangerous Filipino veteran Jimmy “The Silencer” Yabo.

Yabo would serve as a solid step up in competition for Sagetdao, who continued to find his groove in the mixed martial arts circuit.

Prior to the bout, reporters had asked Sagetdao what he thought was the biggest difference between Muay Thai and MMA. Surprisingly, the 31-year-old legend pointed to the difference in pacing of the two sports. Sagetdao noticed that he had to start much faster in MMA, as opposed to Muay Thai where he could take a few rounds to warm up.

Against Yabo, Sagetdao came out of the gate guns blazing.

In another highlight-reel first-round finish, Sagetdao once again authored another exciting ending to a tough bout.

Although opponents should have learned by this point not to engage in the clinch with Sagetdao, Yabo went in ill-advised. Within moments, Sagetdao delivered a crushing knee strike to Yabo’s midsection, instantly sending the Filipino to the canvas writhing in pain.

Catch Muay Thai World Champion Sagetdao Petpayathai from the Evolve Fight Team as he goes for his fourth straight victory in the ONE Championship cage this Friday night, 29 June at ONE: Spirit of a Warrior in Yangon, Myanmar.