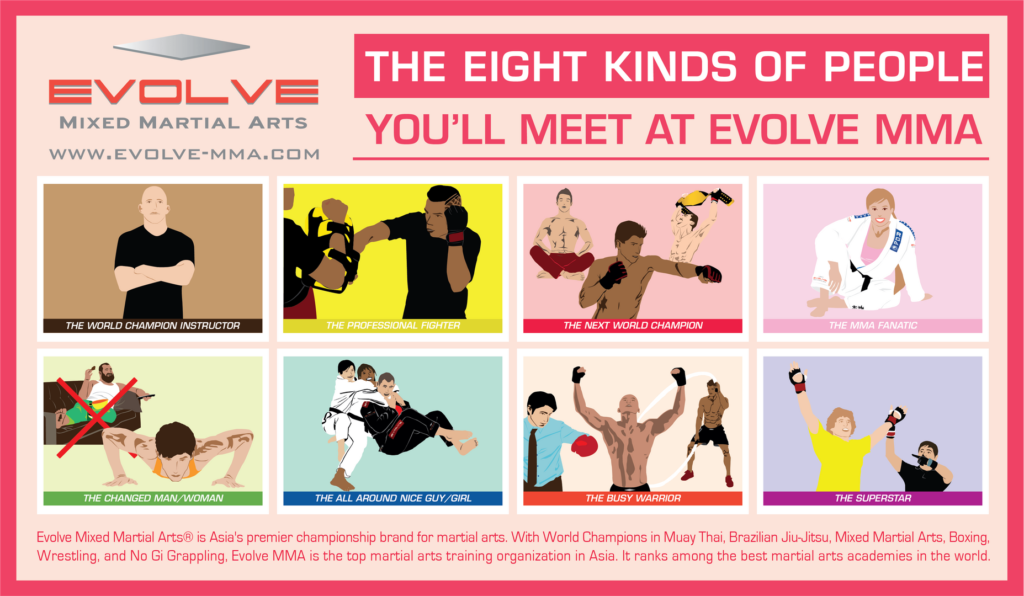 Evolve MMA is Asia’s number 1 martial arts academy. With two state-of-the-art facilities in Singapore and a third on the way, Evolve is home to one of the largest and most diverse martial arts student bodies in the world. Along with this massive student body comes a wide range of cultures, personalities, and unique characters. Although it is nearly impossible to fit all of our members into categories, for the sake of entertainment we have tried to narrow it down to 8 distinct characters.

So without further ado, and in the spirit of comedy, here are the 8 people you will meet at Evolve MMA:

A martial arts World Champion, this person has years of elite experience in either Muay Thai, Brazilian Jiu-Jitsu, Mixed Martial Arts, Boxing, Wrestling, or No-Gi Grappling. Having accomplished all there is to achieve in the competitive arena, this champion now resides at Evolve MMA as part of the world famous Evolve Instructor Team.  He now pursues teaching with the same passion and dedication in which he pursued his World Championships. The Evolve Fight Team smiles for the camera

This person belongs to the Evolve Fight Team, Asia’s most decorated professional fighting team. He or she is a World Champion in Muay Thai, Brazilian Jiu-Jitsu, MMA, Boxing, Wrestling, and No Gi Grappling. As a member of this elite group, he or she has competed and won at the highest levels of competition in the world such as the UFC, ONE FC, DREAM, Pride Fighting Championship, Bellator Fighting Championship, the Lumpinee Stadium Championship, the Mundials BJJ World Championship, and many more.  He or she is a humble warrior who is in peak competitive condition, and serves as inspiration to the entire Evolve Family.  He or she trains really hard.  All day, every day.

3) THE NEXT WORLD CHAMPION This person trains at least six days a week and supplements his or her martial arts training with Yoga for MMA and WarriorFit classes. His or her Facebook status updates revolve around motivational quotes, training routines, and how he or she won the latest local competition.  The Next World Champion studies his or her instructors’ every move and goes to great lengths to emulate them.  It is this person’s dream to join the Evolve Fight Team and become a martial arts World Champion. Who won by TKO in the last ONE FC match during the last thirty seconds of the first round? This person knows it all. From the stats of the fighters to who’s fighting next, he’s a walking encyclopedia when it comes to anything related to MMA. He’s usually a very active student, and he can often be found reenacting the moves and techniques he saw from his favorite fighters over the weekend. Whether it’s Eddie “The Magician” Ng’s latest submission or Jon Jones’s spinning back elbow, he’s up to date on the latest and greatest in the world of MMA. The MMA Fanatic is often the social butterfly of the academy. A former couch potato, this person has evolved into a true warrior since joining Evolve MMA. He has vowed to never return to his sedentary lifestyle, and has fully committed himself to the martial arts lifestyle. Martial arts has changed his life, making him healthier, happier, and more productive. He often trains multiple times a day. He is an excellent source of inspiration and motivation among his peers.

6) THE ALL AROUND NICE GUY/GIRL This person is everyone’s favorite teammate. She is always offering to help her training partners inside and outside of the academy. She is particularly welcoming towards newcomers. Her infectious positive attitude and funny anecdotes definitely make every session an enjoyable one. Stock brokers, dentists, architects, CEOs, chefs – what do they have in common? A passion for martial arts that can only be fulfilled after working hours or during lunch breaks because of their hectic work schedules. These people are admired for their resolve and dedication to sneaking in training sessions regularly despite their absolutely insane work schedules. For the Busy Warriors, a lack of time is simply not an excuse to stop improving their mind, body, and soul. They always find a way to get their training in. It often serves as their ultimate stress reliever, and they are visibly lighter after every training session. These people believe in being awesome all of the time. They are filled with a Warrior Spirit that grows stronger each day, giving them the courage to take on new and exciting challenges. Filled with passion and determination, their aim is to make a real and positive impact on the world. They are the employees of Evolve MMA, the world’s most amazing martial arts family.