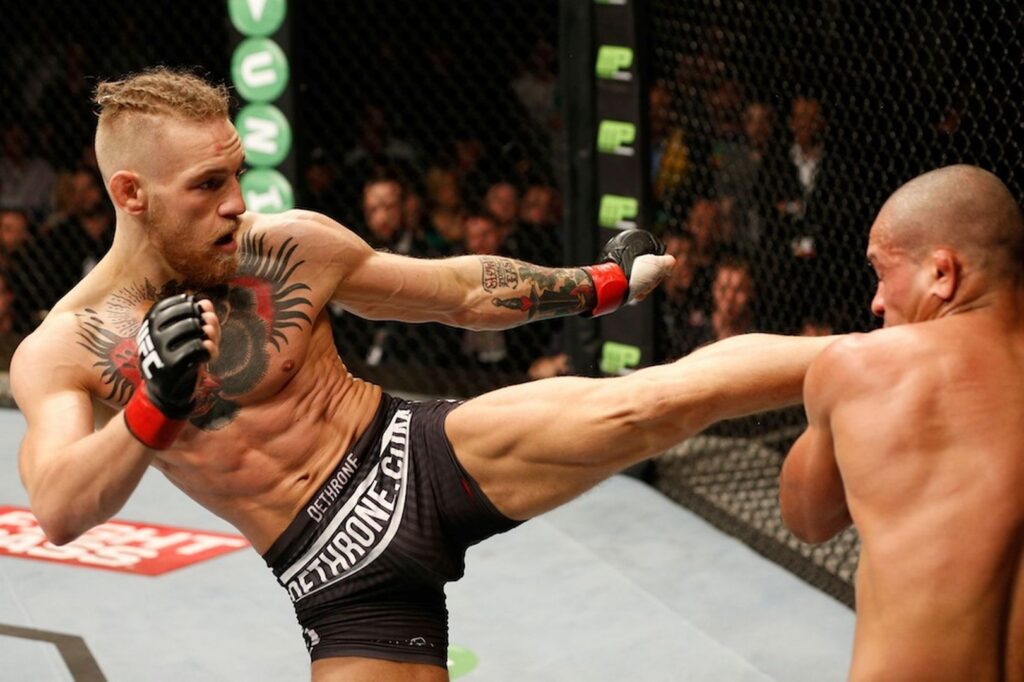 Conor McGregor holds up the Irish flag in victory (Bynzi)

Known for his savage knockout power and his brazen attitude, Conor “The Notorious” McGregor’s punches have placed him on the fast track to UFC stardom. Evolve Daily gives you 5 little known facts about McGregor — perhaps they will reveal the reasons behind his notoriety.

Conor McGregor hails from Dublin, Ireland, and is one of the two mixed martial artists from the Emerald Isle to sign on to the UFC. A former National Boxing Champion, he has won 14 professional MMA fights via knockout. Although his unorthodox style has many tongues wagging, he has proven himself to be a fighter to watch out for. Recently, the MMA world has been abuzz with news about McGregor’s brashness and controversial remarks. His audacious trash-talking have got MMA fans wondering: who is this guy?

“My mum has definitely played a big role in helping me pursue my career,” said Conor in an interview. “She was the one who called my longtime coach John Kavanagh to get me back on track.” At one point in his career, Conor considered calling it quits. Thanks to his mum, Conor is now on the road to becoming one of the best featherweights in the UFC.

Conor McGregor is quite the fashionista, known for his impeccably cut suits and bowties, as well as  for maintaining a well-groomed beard and moustache. His stylish image is enhanced by his skills in the cage, dominating his opponents with his striking abilities. 3. He used to be bullied

“I think I had this face that bullies just liked beating up,” explained Conor. As a child, Conor was a lot smaller and weaker than most boys his age, making him an easy target for bullies. It was this very experience that prompted Conor to start combat sports.

The week before his first UFC fight, the former plumber’s apprentice collected a welfare check worth €180. One week after, he collected a check of US$60,000 after winning Fight of The Night. His first order of business after the win? A nice car and some custom made suits, of course. An uppercut from McGregor stuns Brandao at UFC Fight Night 46

Although vicious in the cage, Conor breaks all MMA stereotypes by revealing his softer side.  In the documentary The Notorious, Conor became nostalgic as he showed his grandfather’s hat to the camera — a valuable reminder of his start in combat sports, which has been in his gear bag for over 10 years. Also recently on social media, he shared his visit to his longtime fan, a young girl named Nadine Harris, before she went for surgery.

Conor McGregor has definitely earned the respect that he deserves and is touted to be the next UFC superstar. With his knockout power and his flashy persona, there is no doubt that his upcoming fight with Dennis Siver in UFC Fight Night on January 18 will be an exciting one to watch!