WATCH: Here’s How To Destroy The Deep Half Guard (Video) Learn some essential ways to pass the deep half-guard.

Here are some concepts you can use  to pass the deep half guard:

To finish any sweep from the deep half, you must use your legs to hook your opponent’s leg to off-balance him and break his posture. Thus, the only way to neutralize this is to flatten your opponent’s legs to stop him from hooking your leg and finishing the sweep. Bruno pushes the legs off his legs and holds them down in order to finish the pass. The deep half guard is a favorite move of many of the BJJ World Champions at Evolve MMA.

For your opponent to effectively sweep from the deep half, he must have your knee close to his head. This will help him control you and keep you in a position where it is easier for him to finish the sweep. Thus, controlling the head is a very important concept in passing the deep half guard. In the video above, watch how Bruno uses the cross face to prevent his opponent from sweeping him with the deep half guard. Remember to use shoulder pressure once you have the cross face!

3) Turn the deep half into a flattened half guard

4) Keep your hips down to flatten your opponent 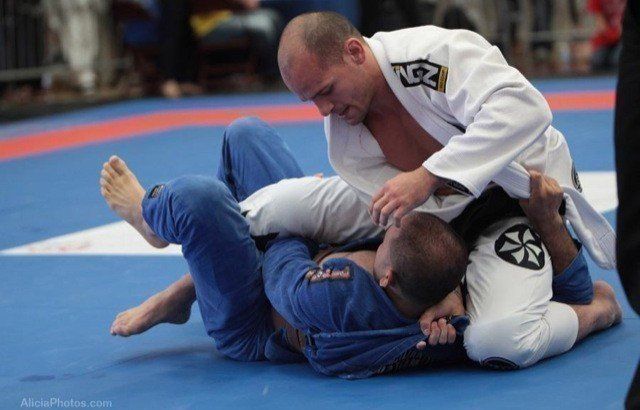 Regardless of whether you are passing the deep half or the half guard, the concept is the same – you must keep your hips down to flatten your opponent. Raising your hips only gives your opponent room to get his hooks in and sweep you. This space gives him the leverage to attack as opposed to being flat, where the only option is to use power to get you off him. And as you know, using power will only tire your opponent out – not a very efficient option at all.

5) Turn to reverse half guard pass

Although shutting down the deep half takes a lot of practice, knowing how to do so could certainly take your BJJ game to the next level. Don’t forget to get some drilling time in so you can practice your passing skills. So tell us, which of these concepts will you add to your arsenal of techniques today?