Circuit training is a great way to diversify your workouts, eliminating the repetitive nature of set programs, and introducing a wide range of compound movements that target multiple areas of the body. It’s been used extensively for athletes to maintain supreme fitness.

In Muay Thai, which is a fast-rising sport in Singapore, circuit training is a major component of strength and conditioning workouts. Fighters use circuit training to get in fighting shape very quickly and effectively. Other forms of exercise, such as High-Intensity Interval Training (HIIT), which targets the abs and results in good fitness, are amazing too.

Simply put, circuit training is a high volume but low resistance workout featuring a series of compound exercises, with 2-3 minute intervals of rest in between. It also sometimes involves elements of cardio, but with the ultimate goal of improving muscle tone and definition, as well as building strength in key areas.

In martial arts disciplines such as Muay Thai, strength and conditioning is such an integral part of success, which makes circuit training the ideal go-to to maintain physical preparedness during training camp while leading up to competition.

If you practice Muay Thai and need a few circuit workouts to incorporate into your routine, here are a few circuits to get you going.

The core is perhaps the most important component of a fighter’s fitness. It’s often referred to as the ‘fuel tank’, or the ‘bread basket’, because the core basically runs everything else in the body. It dictates the speed of movement, the power of strikes, and the stamina a fighter has to work with in any given fight.

At the same time, the core is often the target of strikes. Break down an opponent’s core, and you methodically whittle away at the defenses. Over the course of a fight, an opponent is weakened significantly if enough attention is placed on core attack.

This makes strengthening the core and protecting it the utmost priority for Muay Thai practitioners. 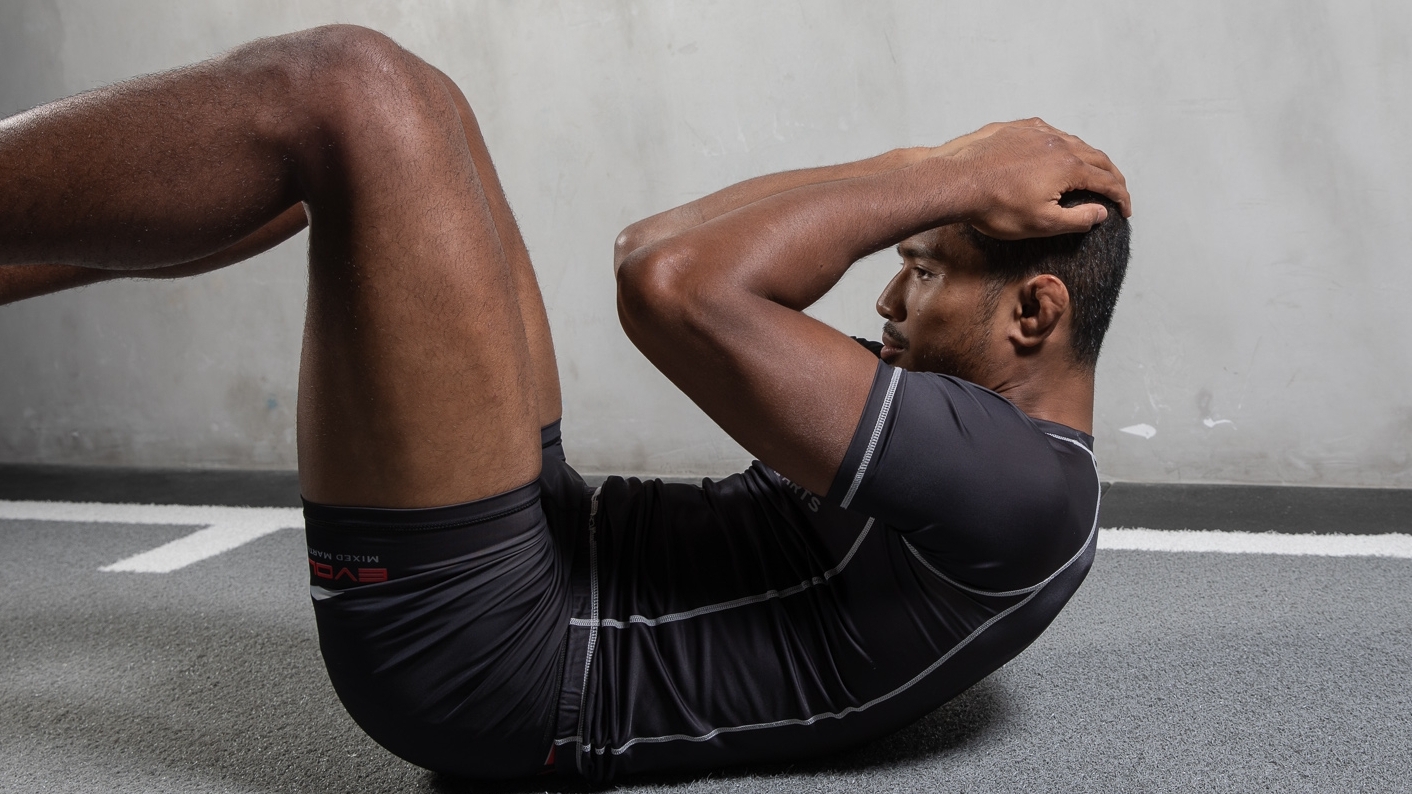 It’s vital to have a strong core for Muay Thai.

The core muscle group is a very big one, which comprises upper, lower, middle, and the obliques. It requires a lot of different exercises to engage each area. This routine has a good mix of fat-burning and ab-sculpting exercises to strengthen that all-important core.

In addition, practicing Muay Thai’s wide range of different kicking techniques greatly engages the lower abdomen. The result is a fortified core that allows fighters to operate with energy efficiency, and deliver amazing power with every strike.

Everyone hates leg day, but everyone knows that it’s extremely important. With circuit workouts, the pain of having to work on the lower body should dissipate greatly. Muay Thai is a martial art that is predicated on kicking techniques, therefore, having strong legs is essential to success.

There are teep kicks, low kicks, body kicks, high kicks, and even switch kicks and knees, which makes the legs an integral part of a Muay Thai kicking game.

Since Muay Thai relies greatly on kicking techniques, kicking strategy, and movement, an incredible deal of focus must naturally be placed on developing the lower body. This leg circuit targets and strengthens the thighs and calves, developing a fighter’s overall balance, as well as improving the power transfer from the base to the core.

This circuit features some classic leg exercises like the squat to strengthen the hamstrings, squat jumps to build explosion, alternate lunges to improve balance and control, and more.

This leg workout will have you kicking with thunderous power in no time.

The legendary Nong-O Gaiyanghadao from the Evolve Fight Team is a tremendous kicker, and he works on his leg strength every single day. If you’re a Muay Thai practitioner, this is exactly what you need.

You often see jump rope workouts in all the major striking martial arts like boxing, kickboxing, Muay Thai, and the like. And that’s because jumping rope is awesome for improving many aspects of athleticism, like coordination, speed, balance, core strength, cardio endurance, and footwork, among others.

Jumping rope is essential for every fighter’s striking game, because there is a steep learning curve to going from basic to advanced. It’s easy to jump rope, we’ve all done so as children, but to jump rope as a fighter is a different beast. Some of the best fighters in the world have showcased amazing jump rope ability. 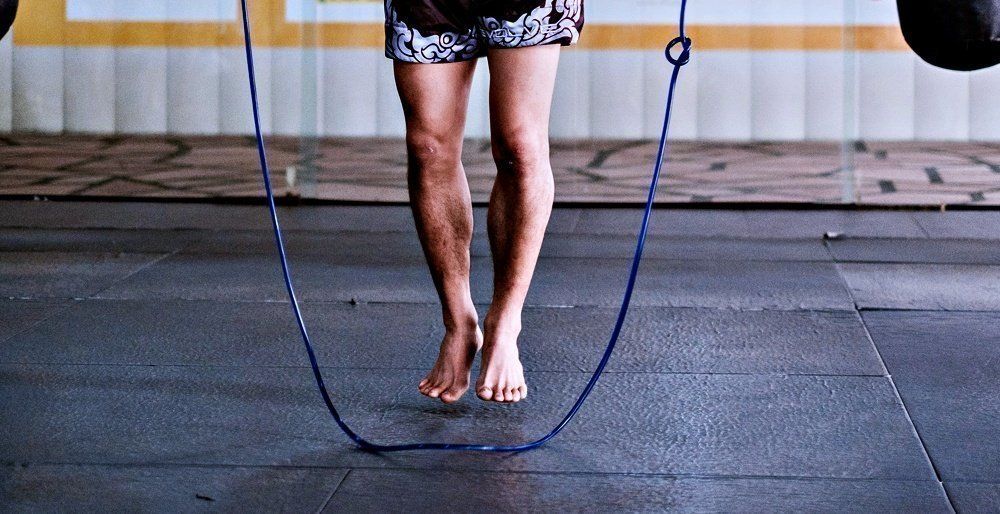 Jumping rope is an important part of Muay Thai.

Jumping rope helps fighters specifically develop footwork for ring movement. As always, the key to throwing heavy strikes is a good method of power transfer from the base to the core. This greatly involves coordination and balance in the lower body, which jumping rope directly improves.

This jump rope circuit is a good way to get started. Beginners find an ideal starting point here, and can work on these exercises to advance gradually through the stages. It also incorporates some basic exercises, so you’re burning a ton of calories while learning how to jump rope.

Like we’ve focused on strengthening the legs for kicking in point two, it’s time now to focus on the upper body.

Muay Thai is a combination of kicking, as well as punching techniques. Some of the best punchers in the game like Rodtang Jitmuangnon and Yodsanklai Fairtex use boxing circuit workouts to improve their combinations.

Straights, uppercuts, jabs, hooks, and elbows all need to be developed into effective weapons, in the same way a chef sharpens his knives every day inside the kitchen. Related to that, you must also condition your upper body to enhance your aerobic and anaerobic efficiency.

These workouts may be simple to you, but a combination of these and with short intervals of rest, it becomes an effective way to condition the entire body, specifically the upper body which needs lots of attention. Make no mistake about it, this circuit is absolutely intense. If you’re out of shape, you may have a hard time completing this workout.

Five rounds of bicycle kicks, basic push-ups, mountain climbers, punch hops, burpees, and finished off with some uppercut shoeshines make up this circuit, with around 1-2 minutes of rest in between rounds.