The Gracie family is possibly the most influential clan in all martial arts. The family is known for their specialization in Brazilian Jiu-Jitsu, a highly effective form of grappling, and their influence on fighting spans many generations. One of the most prominent figures in the Gracie family is none other than the legendary, Renzo Gracie. Renzo was born in Rio de Janeiro, Brazil, on March 11, 1967, grandson of Gracie Jiu-Jitsu creator Grandmaster Carlos Gracie, son of Grandmaster Robson Gracie, and older brother of Ralph and Ryan Gracie.

Renzo, like the rest of the Gracie family, began training Jiu-Jitsu as a child with many renowned Gracie instructors, including Rolls Gracie providing official training to him throughout the years. Renzo later received his black belt from Carlos Gracie Jr and went on competing in both MMA/Vale Tudo and submission grappling.

Renzo’s first official MMA match was in 1992, where he defeated Luiz Augusto Alvareda by rear-naked choke and went on to continue fighting in both MMA and grappling for many years.

Renzo has fought in various world-class organizations which include PRIDE Fighting Championships, International Fight League, Ultimate Fighting Championship, and ONE Championship. Renzo joined the World Combat Championships in 1995. But because of his Brazilian Jiu-Jitsu experience, Renzo was placed as the last entrant. The event was structured uniquely having two tournaments, separating the strikers and grapplers, and winners of each respective tournament would face off in the finals. During the finals, he fought against kickboxing specialist James Warring, finishing off with a neck crank and clinching the championship title.

Renzo Gracie was part of PRIDE FC’s inaugural event in 1997 alongside his cousin Rickson Gracie where he faced Japanese judoka, Akira Shoji. Gracie dominated the fight with multiple submission threats, but the match ended with a draw because of equal points scored by both fighters. Renzo later clinched a win at the next promotional event, where he defeated Japanese fighter Sanae Kikuta, finishing off with a guillotine choke. He fought a total of 8 events for PRIDE FC and battled against Kazushi Sakuraba, Dan Henderson, and Carlos Newton, some of the greatest fighters of the era.

When the International Fight League (IFL) shifted to a camp-based structure in 2008, the then champions of the IFL championship in 2007, the New York Pitbulls was replaced by The Renzo Gracie Academy (RGA), with Renzo Gracie being the face and coach of the group. The RGA joined the International Fight League (IFL) in 2008 a fighting promotion where fighters are represented by teams. During the event, Gracie defeated both UFC Hall of Famer and Welterweight champion Pat Miletich and UFC Welterweight champion Carlos Newton.

Renzo then entered the UFC in December 2009 debuting against former UFC champion Matt Hughes in the promotion. He fought gallantly on April 10, 2010, in Abu Dhabi but eventually lost to Hughes in round 3 via TKO. He became the 2nd Gracie defeated by Matt Hughes, with Royce Gracie being the first.

His most recent fight was held at ONE Championship: Reign of Kings on July 27, 2018, where he fought against Japanese fighter Yuki Kondo, an icon of the sport, with a record of 103 professional fights under his belt. It was a historical moment as both fighters showed tremendous fighting spirit despite their advanced age. Renzo defeated the Japanese legend via submission in round 2 clinching the victory with loud voices of triumph from the crowd.

Some of Renzo’s Notable achievements also include:

In the 1990s, Renzo established the Renzo Gracie Academy in New York City, which became one of the pillars of Brazilian Jiu-Jitsu in the United States. The Renzo Gracie Academy has since established itself as one of the premier academies in the United States with various affiliates with countries from Brazil, Singapore, Canada, Peru, South Africa, Mexico, and Israel. 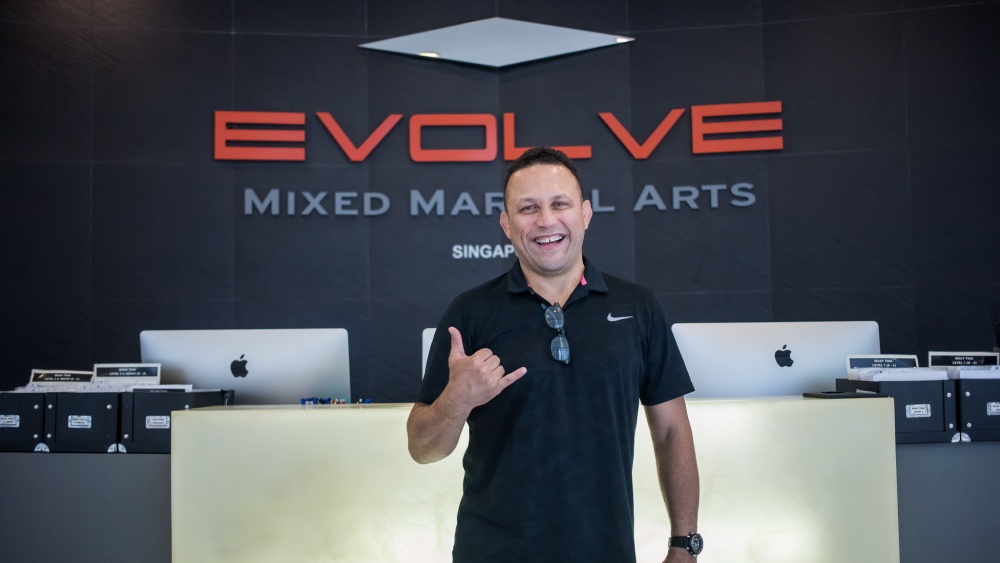 In fact, Evolve MMA in Singapore is home to the first and only Renzo Gracie Brazilian Jiu-Jitsu gym in Asia.

With his distinctive blend of charm and brilliance, Renzo has established himself as one of the most widely recognized BJJ masters and mentors in the sport. 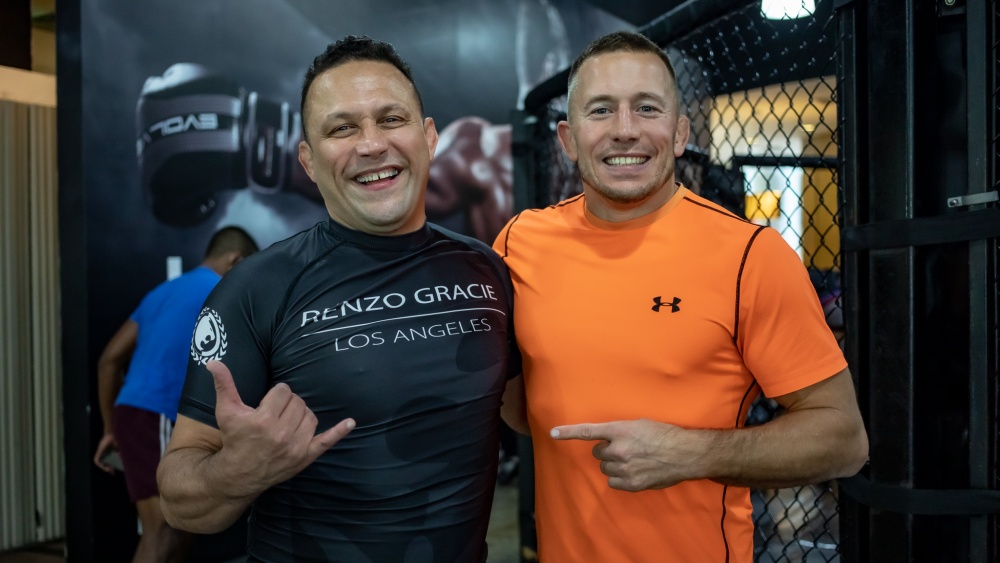 What’s unique about Renzo’s grappling style is that it’s easy to digest and very effective in both combat and sport BJJ. It is a dream for any self-respecting BJJ practitioner to learn from this great legend.

An Icon In Every Sense Of The Word 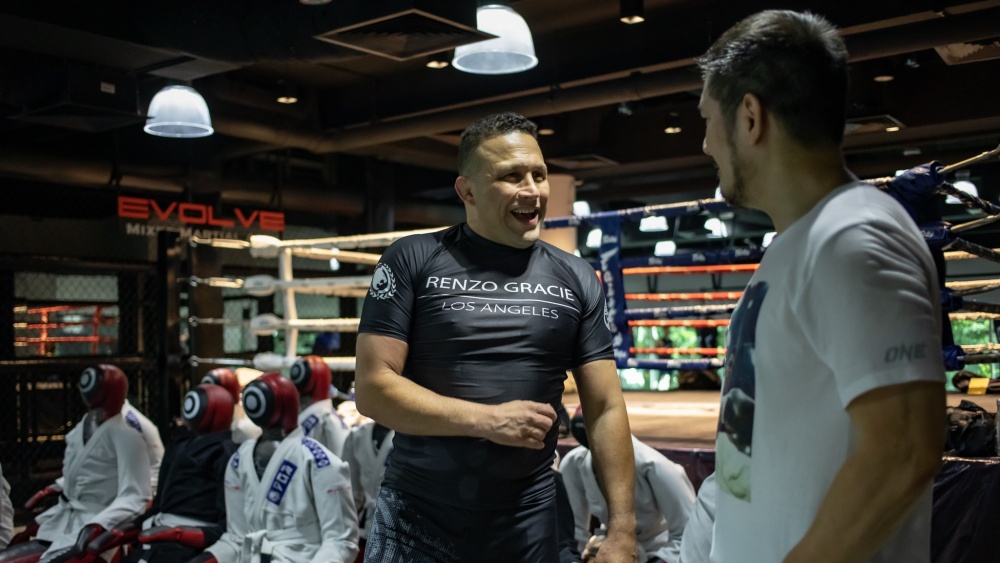 Renzo Gracie is truly one-of-a-kind. He lives a life that most people would think came forth a movie. His philosophy towards martial arts comes from a perspective of honesty and resilience, perhaps that’s why he is so well respected by the community. He left a fantastic quote in one of his interviews:

“People would see a lot of times fighting as an ugly thing, as a thing that denigrates the human being. In reality, you see fighting on everything. Everything’s fighting. Doesn’t matter what it is. You wake up in the morning; to get out of bed is a fight, believe it. So, fighting is actually the best thing a man can have in his soul.”