Contrary to popular belief, BJJ World Champion and ONE Superstar Bruno Pucci was not born with six-pack abs. Although his chiseled appearance might say otherwise, Pucci was once an overweight, unusually short kid. “I was the shortest kid in my class,” reveals Bruno, “and kids were always making fun of me. They’d make fun of my height and call me short.” Because he was so defensive about his height, Bruno would often get frustrated and lose his temper. He would lash out at whoever made fun of him, which resulted in his father being called to the principal’s office many times. “I would get so angry being teased. I remember that one time a kid wouldn’t stop making fun of me, calling me short, and I got so angry that I tipped a rubbish bin out over his head,” Bruno admits.

Because he was significantly shorter than everyone in his class, and even his family, Bruno’s father was concerned that there was something wrong with his son. He decided to take Bruno to get looked at by the doctor. After meeting with the doctor, Bruno’s father’s worst fears were confirmed – his son was diagnosed with a pediatric growth hormone deficiency. Several x-rays and blood tests confirmed the deficiency, and this would mean 5 years of daily treatment for Bruno. Bruno was diagnosed with growth hormone deficiency when he was 10 years old.

As a 10-year-old boy, Bruno did not look forward to receiving daily injections for the next five years. He also knew that his medical problem was taking a toll on his father, a single parent who worked very hard to make ends meet for his small family. As a dentist in a small town, clients were scarce, and paying tuition for his two sons was leaving a huge dent in his bank account. “I saw during this period how hard he was working for me, so I’m really grateful for his hard work,” explains Bruno. The treatment didn’t come cheap too. “It was a very expensive treatment, and there was no way we could afford it, so we had to go through the public health system,” recalls Bruno. “Going to our monthly appointments meant we had to wait for hours just to see the doctor and get our supply.”

Bruno’s father knew it wasn’t easy for his son; it pained him to hear stories of Bruno being bullied at school and because of his medical condition, he had to watch his diet as well. Unlike other boys his age who enjoyed treating themselves to junk food as often as they could, Bruno had to maintain a balanced diet of protein, fiber, and nutrient-rich vegetables. Instead of living the carefree life of a young boy, Bruno felt like he was living inside a bubble. “Even just traveling to another city was tough because we’d have to get a medical certificate and a letter from our lawyer because of my condition,” says Bruno. “My father was the person who knew how to administer the injection. When my father was out of town, or when I would visit my grandmother during the school holidays, I would have to spend a lot of time going to a pharmacy every day for them to inject me. This would mean that unlike other kids, I couldn’t play with my friends whenever I wanted,” recalls Bruno. 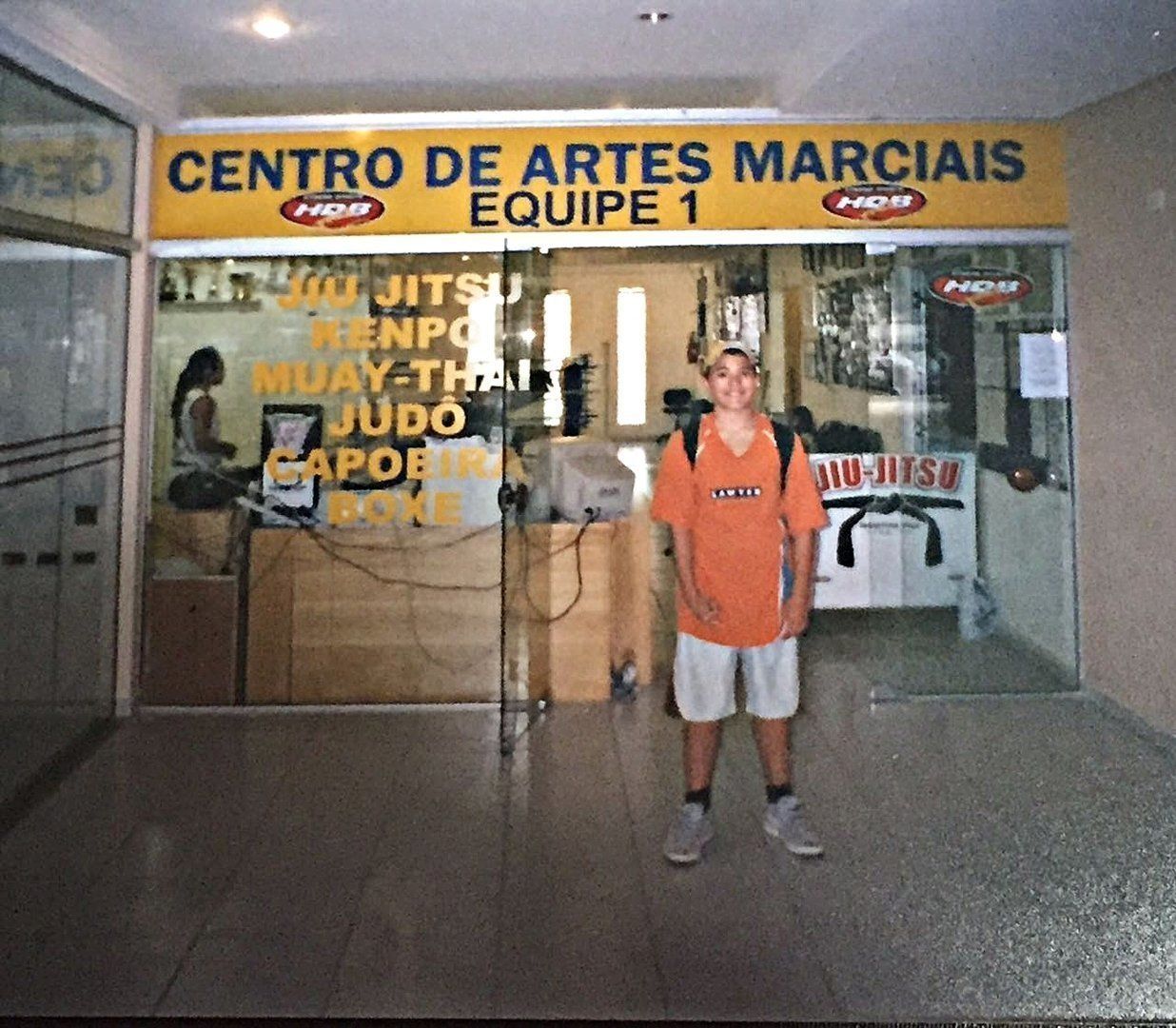 The gym where Bruno began his martial arts journey.

As the saying goes, “every cloud has a silver lining”; Bruno’s silver lining was that he had to stay active to keep him healthy. This meant that he had to find a physical activity that he liked – which certainly wasn’t a problem for a 10-year-old boy. “I skateboarded for a couple of years, but it wasn’t anything serious. I also swam for my school and won two medals,” Bruno shares, “but it wasn’t something that I wanted to keep on doing. I didn’t feel motivated enough.” Just like every boy his age, Bruno was an action movie fanatic. He relished watching fight scenes, martial arts movies, and video games. “I loved anything to do with fighting, and I wanted to do Muay Thai or kickboxing because it was like what I saw in the movies,” says Bruno.

While running an errand with his father, Bruno spotted a Brazilian Jiu-Jitsu gym. His father persuaded him to try it; eager to help Bruno find an activity he truly loved. Bruno did a trial class right then and there, and the rest is history. “I remember the first move that I learned, an armbar.” Bruno reveals, “It was just like everything I saw in the movies, except in real life. I thought it was the coolest thing ever.” 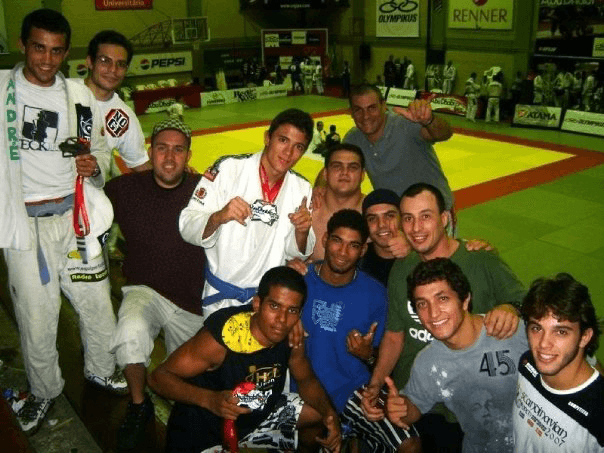 Bruno and some of his teammates, including Prof Gamal Hassan.

It was Brazilian Jiu-Jitsu that Bruno stuck with. He wanted to train as much as he could and learn the techniques that always amazed him. He would train almost every day after school, as much as 4 to 5 hours a day. It didn’t matter if he was worn out from studying and doing his homework. To Bruno, it felt as if he were playing video games in real life. He was also fascinated with the idea of becoming a black belt, a dream of his ever since he was in elementary school when he first learned Judo.

Bruno’s BJJ training helped put a stop to the bullying. With the combination of the medicine and his rigorous BJJ training, Bruno went through a growth spurt. “BJJ helped me gain self-confidence, and I started to get a lot stronger physically. My newfound confidence helped me carry myself in a certain way that deterred the bullies. Also, being bigger and stronger didn’t hurt,” Bruno explains, “what training BJJ also helped with was my ability to control myself. I was able to control my emotions better, and this prevented me from lashing out at people like I had before.” 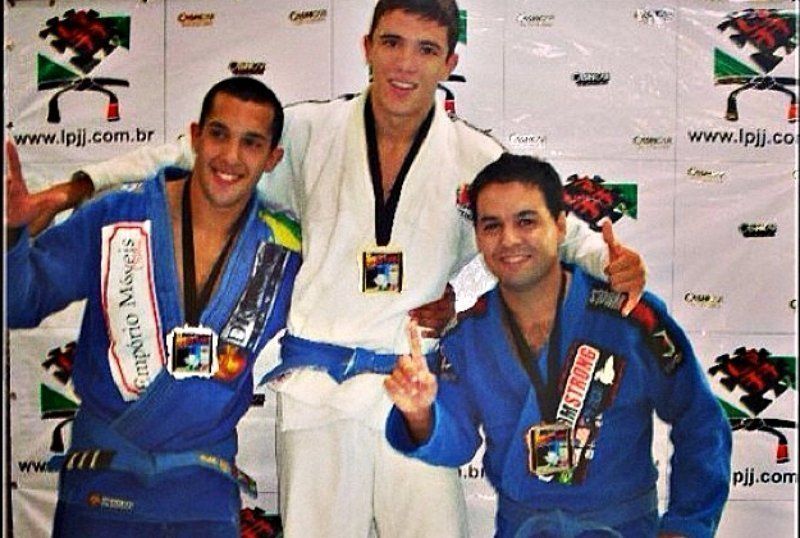 Bruno competed regularly, often finishing atop of the podium.

Bruno also loved the thrill of competing. He loved the feeling of having his arm raised in victory and would compete whenever he could. It gave him the confidence to stand up to those who bullied him in the past, and the mental toughness to better control his temper. He would go on to compete almost every week, in the smallest in-house competitions, state competitions, and he would sometimes even travel across the country to compete. In fact, his teammate and current colleague at Evolve MMA, BJJ Nationals Champion Gamal Hassan, had served as his guardian, accompanying Bruno to his competitions when he was underage.

Bruno had found his passion. He became obsessed with BJJ, spending the majority of his time at the gym. His BJJ instructor, Sebastian Lalli, became a father figure to Bruno. “He helped me secure sponsorships to help fund my trips to BJJ competitions. He also helped me secure grants from the city to help me get to more competitions around Brazil and abroad,” explained Bruno.

It was also Brazilian Jiu-Jitsu that helped Bruno forget about the medical condition that plagued him for years. “I hated getting those injections and sometimes I thought about giving up,” Bruno reveals, “I tried to convince myself that I didn’t need the medicine anymore, that I was normal just like everyone else. But because of BJJ, I learned how to persevere and just stuck with my treatment. My dad also helped me a lot. After my one thousandth injection, he baked me a cake to celebrate this milestone. I owe a lot to him too.”

Several years later, after training and competing consistently, Bruno finally received his black belt from his instructor. “I realized that being a black belt had a completely different meaning to what I thought it did back in the day,” Bruno says, “It’s just like a university degree – to earn it, you need to work hard, attend classes and show respect.”

After years of constantly competing, Bruno was finally able to achieve his dream and win the big one. He won the no-gi division of the BJJ World Championships, one of the most prestigious tournaments in BJJ. Through hard work, dedication, and persistence the man who was once a short, chubby boy had become a World Champion. “When I had the growth hormone problem, I never thought I would become an athlete. BJJ helped show me that with hard work anything is possible,” Bruno says.

Thanks to his medical treatment and daily BJJ training, he now stands at a tall 180 centimeters. Today, as an instructor and MMA fighter, Bruno continues to use the lessons he’s learned from his days as a BJJ student and shares them with his students and teammates. Bruno’s story undoubtedly reveals the healing powers of martial arts and its ability to change lives. Perhaps we can use Bruno’s story as inspiration to change our lives for the better as well.

Without question, Kickboxing World Champion Giorgio “The Doctor” Petrosyan is one of the greatest kickboxers in history. His career spans 16 years, and his overall record of 101-2 is one of the most impressive resumes…

Two-time ONE Lightweight World Champion Shinya “Tobikan Judan” Aoki from the Evolve Fight Team is one of the most dangerous mat tacticians of all time. But if you had to describe Aoki’s professional mixed martial… 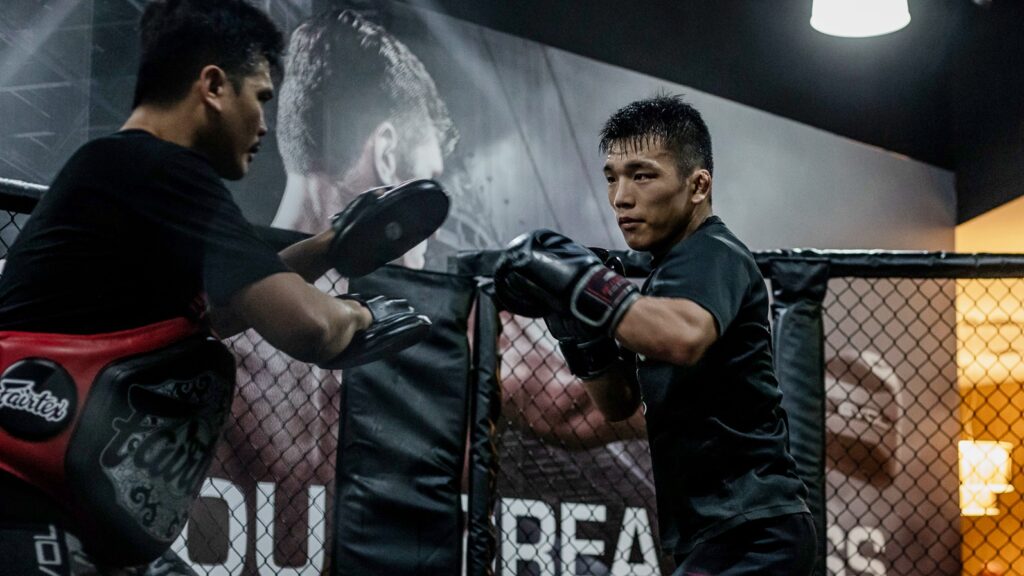 Making his ONE Championship debut this Friday night is Japanese strawweight contender Ryuto “Dragon Boy” Sawada from the Evolve Fight Team. Sawada is a 23-year-old from Tokyo who started his professional mixed martial arts career…