8 Celebrities Who Can Actually Fight In Real Life When Justin Bieber and Tom Cruise once briefly contemplated fighting each other inside the Octagon, it raised quite a few eyebrows. Here were two regular guys (well, pop culture superstars), who could potentially end up face-to-face in combat. Yet fans without a doubt asked themselves the most obvious question: Can these two actually fight?

Martial arts, and to be a genuine martial artist, it takes years of dedication and practice to be able to reach a level acceptable for competition. It should not be taken lightly.

While Bieber does his fair share of boxing training (with Floyd Mayweather, no less), he’s in no way capable of actually fighting in the cage. Cruise, at the very least, was a high school wrestler, so he may have some of the necessary skills hiding latent somewhere.

Yet, there are a handful of celebrities who possess the skills required to enter the field of combat. You’d be surprised with some of them and what they are capable of. These men and women have trained in the art of combat.

Let’s take a look at who they are and what they’ve done in the gym. Today, Evolve Daily shares 8 celebrities who can actually fight in real life.

He’s famous for roles in movies such as Blade, Demolition Man, and The Expendables. Wesley Snipes has been in blockbuster action films since the 1990’s, and he’s used a variety of martial arts disciplines to portray fight scenes in his movies.

Singer, songwriter, and pop star Demi Lovato, famous for her hits “Sorry Not Sorry”, “Give Your Heart a Break”, and “This Is Me”, has a bright and flashy superstar smile, and is every bit the pop star you would imagine her to be. But don’t let her good looks fool you, Lovato takes names on the mats, and she’s been doing so for a long time.

Lovato has been studying and training in the art of BJJ for a while now, and is equipped with the technical knowledge to choke you out or hyperextend your arm if you get too close.

He’s the God of Thunder on the big screen, has biceps the size of footballs, and trains like a madman to achieve superhero levels of fitness. Chris Hemsworth spends hours and hours of time training in the gym to better play his iconic superhero movie role of “Thor”. But aside from being a health and fitness nut, Hemsworth is also a huge fan of mixed martial arts.

It comes as no surprise then that he does a bit of martial arts training himself, and mixes it up well with his routine. Hemsworth is known to train in both boxing and Muay Thai when he feels the need to unleash Thor’s fury on the pads.

On the silver screen, he plays a buff dude who wears his underwear over his pants, has a huge ‘S’ on his chest, can zip through the air, and shoot laser beams out of his eyes. Henry Cavill may very well be the best Superman we’ve had yet, finishing off bad guys with his superhuman strength. But that doesn’t mean he can’t fight in real life too.

Cavill also trains in the art of BJJ avidly and utilizes the martial art to not only keep himself in top shape but also to equip him with the knowledge of the grappling sciences.

Known for playing Heimdall in Thor: Ragnarok, and Brixton in the upcoming Hollywood blockbuster Fast & Furious: Hobbs & Shaw, Idris Elba is the epitome of an action star, with the chiseled physique, mean mug, and fighting skills.

Why does he fight so well on screen you ask? Maybe because Elba is a legit kickboxer who has had a couple of professional fights. Elba sheds some light on his training and competition in the docuseries, Idris Elba: Fighter. 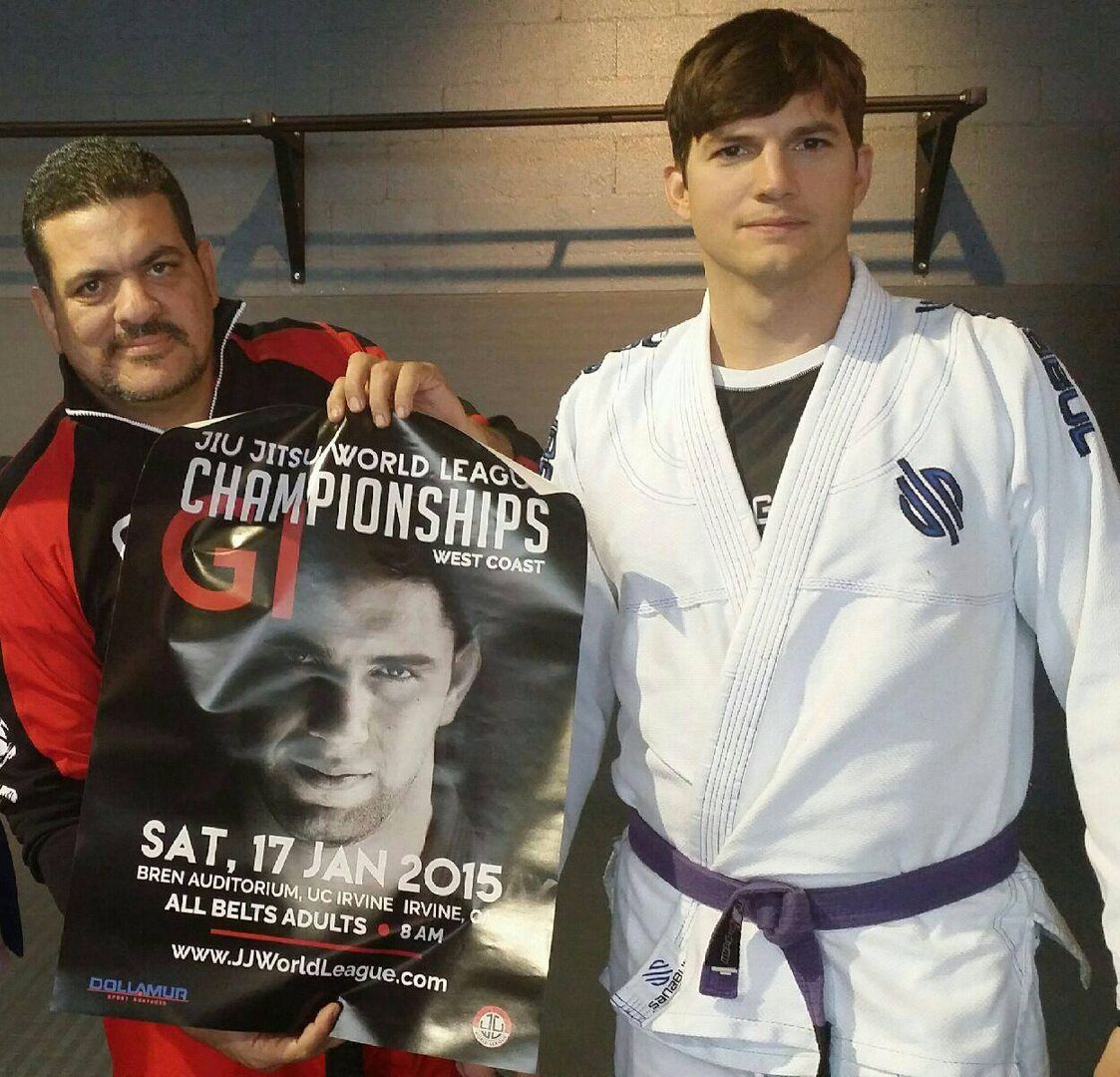 To many fans, he’s just Kelso on That 70’s Show, but Ashton Kutcher is more than just a romantic comedy superstar. He’s also a high-level BJJ practitioner who has been working on his skills for a few years already and holds a purple belt.

His acting career took off when he landed the role of A.C. Slater from Saved By The Bell, and then soon dabbled in the world of mixed martial arts and boxing. Mario Lopez got his lean and cut physique by wrestling and playing football in high school, but was able to maintain his fitness by training in boxing and BJJ.

In this clip, Lopez is seen sparring with Mexican boxing great Canelo Alvarez and appears to have held his own.

One of the most prolific action stars in the modern day, Jason Statham has made it a habit of kicking butt on screen — whether he’s the good guy or the bad guy. Star of movies such as “Transporter”, “The Expendables”, and the “Fast & Furious” franchise, Statham’s on-screen fight sequences are so realistic because the guy actually knows how to fight.

Statham trains in various martial arts disciplines from BJJ to kickboxing to boxing and wrestling. Just like his characters in the movies, Statham can put a beatdown on anybody who wishes to put him to the test.