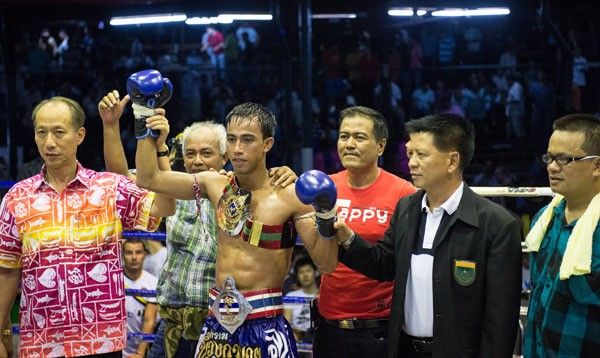 Speed, precision, and unwavering technique; Penaek Sitnumnoi is without a shadow of a doubt one of the most gifted Muay Thai fighters of his generation. His achievements in Muay Thai are nothing short of incredible. Penaek is the recipient of the prestigious Fighter of the Year Award, a three-time Lumpinee World Champion, Omnoi Stadium Champion, Thailand National Champion, WPMF World Champion, Channel 7 Champion and the list goes on and on. An extremely technical and well-rounded fighter, he has fought and beaten some of the biggest superstars in Muay Thai.

Sam-A Gaiyanghadaogym is regarded as one of the greatest Muay Thai fighters in world today. The 32-year old multiple-time Lumpinee World Champion is a master technician in the ring also known for his impenetrable defense and counter striking abilities. For most fighters in Thailand, being able to go toe-to-toe with Sam-A is a feat in itself.

At the time of this fight, Penaek was just 23-years of age and already one of the top fighters in Thailand. The fight was held at Lumpinee Stadium with the winner set to receive the prestigious Fighter of the Year award. Both fighters were evenly matched and provided exhilarating back and forth action for three straight rounds. However, in a stunning turn of events, Penaek managed to knock Sam-A down in the fourth round with a bone-shattering elbow strike, sealing the round and winning the fight by unanimous decision.

As a Lumpinee World Champion, Rajadamnern World Champion, WMC World Champion and the Yokkao World Champion, Pakorn, like Penaek, is one of the youngest and most accomplished Muay Thai fighters not just in Thailand, but the world. Currently fighting out of PKSaenchaiMuayThaiGym, Pakorn holds wins over some of the biggest names in the world of Muay Thai.

In this fight, both fighters put on an incredible display of technique. But Penaek was clearly the better fighter that night, managing to outpoint Pakorn in the clinch and with beautifully placed counter attacks on the feet. Against one of the best fighters in the world today, this fight was a true testament to Penaek’s technical prowess and resilience.

This fight against Denkiri Sor Sommai at Songkhla Stadium is one of Penaek’s most dominating fights. Penaek had unshakeable defense and was able to out strike Denkiri in almost every exchange they had on the feet. As the fight threw deeper into the later rounds, Penaek’s strength and power in the clinch proved too much for his opponent. He knocked Denkiri out cold with a perfectly placed elbow over the top after feinting a knee strike.

Having fought one another multiple times over their careers, Penaek and Sitisak Petpayathai have one of the most heavily contested rivalries in Thailand. This fight took place back in 2011 and was for the 130lbs Channel 7 Championship Title. Both fighters put on one of the most exciting fights of the entire year, pushing each other relentlessly on the feet and in the clinch. In the end, Penaek’s style and superior technique that night was impossible to ignore and he won the fight on the judges’ scorecard.

Muay Thai is as powerful as it is beautiful. Penaek Sitnumnoi is a true representation of the art; graceful in his technique, and deadly in his precision. It’s not hard to see why he’s one of the most gifted fighters to ever grace the Muay Thai ring. Now, he shares his knowledge alongside other Muay Thai legends as part of Asia’s most decorated instructor team at Evolve MMA.